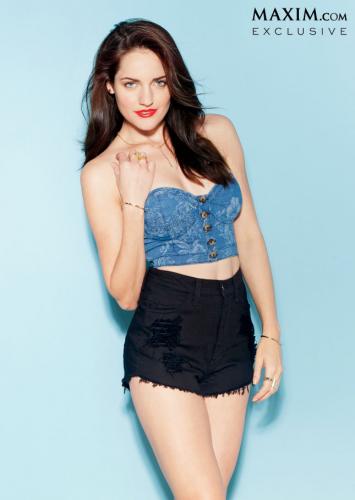 Photographed for Maxim by Marley Kate | Licensed to Alpha Media Group 2013
The star of TLC’s Breaking Amish packed her bonnet and moved to New York City to pursue a modeling career–starting with Maxim.[/caption]Breaking Amish Star Poses for Maxim

Kate Stoltzfus has done away with her traditional, conservative Amish garb in favor of makeup, midriff tops and sexy short shorts.

One of the stars from the popular reality television show, "Breaking Amish," Stoltzfus, recently posed for Maxim sporting bright red lipstick, mini leather skirts, and most shockingly of all, she was baring her belly.

According to Stoltzfus, underneath their long skirts and baggy, shapeless blouses, many Amish women have super toned and fit physiques. Stoltzfus attributes this to the long hours that the Amish spend each day doing physical work, as well as their healthy diet; Amish communities are avid gardeners, growing and preparing their own crops and as well as slaughtering their own animals.

"There are definitely a lot of Amish women who have great bodies, because they work hard. They also eat really healthy, since they grow their own food. That’s one big thing I miss about home, being able to garden and take care of plants."

Since appearing on "Breaking Amish," Stoltzfus has left the Amish community to pursue her modeling aspirations. Despite her Amish upbringing, however, Stoltzfus has definitely had her wild moments. Last year she was charged for driving under the influence.

But life in the big city hasn't scared Kate off just yet.

"Before I had even signed a contract with a modeling agency, I did a test shoot to see if I could photograph well, and the first outfit they put me in was a bathing suit," the TLC reality star revealed. "I have to admit it was a little intimidating, but now I enjoy doing it."

Now that Stoltzfus has left the Amish community, she has been shunned by all of her previous Amish friends, as well as her family. They are not allowed to have any communication with Stoltzfus, otherwise they will also be exiled from the community. 'Breaking Amish' Star Shows Off Sexy Side for Maxim
http://www.extratv.com/2013/07/03/breaking-amish-star-maxim-kate-stoltzfus-shows-off-sexy-side-pics/