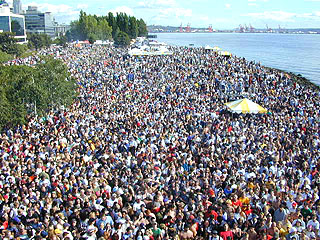 The Seattle Hemp Fest is a stoner's paradise. It is held every year in the city as the ultimate place to learn more about marijuana as a lifestyle from recreational smoking to medical aid.

According to the official website, the goal of the festival is to:

To educate the public on the myriad of potential benefits offered by the Cannabis plant, including the medicinal, industrial, agricultural, economic, environmental, and other benefits and applications. In particular, Seattle Hempfest seeks to advance the cause of Cannabis policy reform through education, while advancing the public image of the Cannabis advocate or enthusiast through example.

However, the event will be even more exciting this year thanks to the bags of Dorrito chips being handed out by the city's police force. The legalization of marijuana has brought many changes to the city. The police are just doing their part in supporting the community's need for... munchies.

The Seattle Police Department will be in attendance to educate people about the new laws concerning the latest marijuana reform. It is legal in the city to smoke for personal purposes as long as their is no intent to sell or grow it. Anyone over the age of twenty-one years has the legal right to have an ounce or less on their person. The SDP wants everyone to be comfortable with their presence, and their humor is definitely helping them score points with Mary Jane lovers.

It should be noted that the Seattle Police Department will "not be giving out Bugles" at Hemp Fest according to their Twitter. That is something they would not stoop to do.

Turducken of The Sea, A Shark In A Shark? Sharkception? (PHOTO)