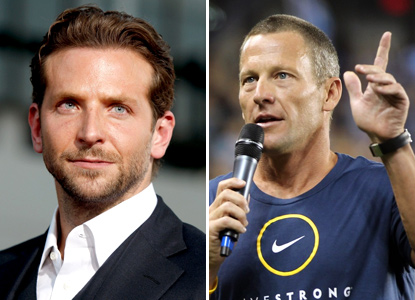 Don't get too excited though. Initial reports suggest Cooper has only signed on as a producer for 'The Red Blooded American' and will likely play a lead character.

According to the industry news site, Cooper is joining "Red Blooded American" as a producer and will play a major role in the film, though it's unclear which of the two parts roles he'll take.

According to Deadline, one of those roles is Armstrong, and the other is Tyler Hamilton, the former Armstrong teammate who was part of Armstrong’s inner circle on the US Postal Service Team and who came forward and told what he saw Armstrong doing in a 60 Minutes segment.

The script for the film will be written by Side Effects scribe Scott Z. Burns.

This is one of three projects based on Armstrong's experiences. Working Title is also working on one that will star Ben Foster as Armstrong. That one comes from Trainspotting scribe John Hodge. Then there is the J.J. Abrams project, where Abram's is producing film at Paramount Pictures, which is based on the book Cycle of Lies: The Fall Of Lance Armstrong. Cooper was actually approached by Abrams at one point to star in the film, but it looks like Cooper has other plans.

The rise and fall of Armstrong is such an interesting, dramatic story, which is why everyone wants to get in on the action. It seems like all the studios are trying to fast track their films into production, hopefully they spread out the release dates so we aren't bombarded with a three Lance Armstrong films at once.

Are you excited to see Bradley Cooper play Lance Armstrong on the big screen? Bradley Cooper In Talks to Join Lance Armstrong Film: Here's Why the Actor is Perfect to Play the Cyclist!
http://ca.eonline.com/news/449597/bradley-cooper-in-talks-to-join-lance-armstrong-film-here-s-why-the-actor-is-perfect-to-play-the-cyclist