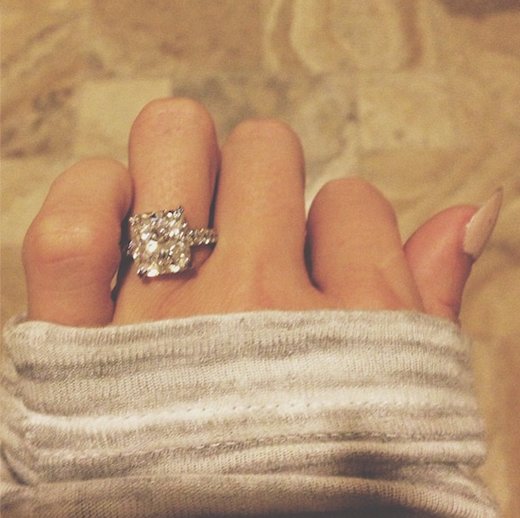 The worlds of hockey and golf are about to merge in a big way. Paulina Gretzky, the daughter of NHL Hall of Famer Wayne Gretzky, announced her engagement to PGA golfer Dustin Johnson via social media. Gretzky's announcement was accompanied by a photo of a ring on her finger along with the caption, "Never Been Happier @djohnsonpga."

Gretzky and Johnson's relationship became known earlier this year when she was spotted in the gallery at the Tournament of Champions at the Kapalua Resort in Maui, Hawaii. Johnson, by the way, won that event. A week later, Gretzky and her parents watched Johnson at the Sony Open, also held in Hawaii.

The pair started dating about a year ago, and although we’ve seen countless photos of them together, Johnson only recently opened up about their relationship.

He told ET Canada they met at a dinner hosted by Paulina's parents.

“We were friends for a long time before we started dating,” he said.

Gretzy, 24, made headlines when she abandoned social media after her father objected to some controversial photos she posted of herself. She has sung the Canadian National Anthem during the Heritage Classic Weekend and at the Hockey World Cup. Gretzky has also posed for Flair Magazine. Her father won four Stanley Cups with the Edmonton Oilers and is the NHL's all-time leading scorer with 894 goals.

Johnson, 29, has won seven Tour Championships in his career, including the Pebble Beach Pro-AM Twice.