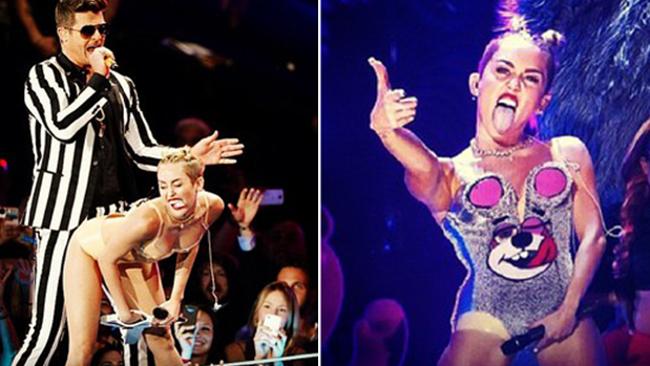 After a performance clearly meant to demonstrate she has outgrown her childhood counterpart Hannah Montana, Miley Cyrus has received a lot of criticism for the provocative dance called twerking that she performed with Robin Thicke during the MTV VMAs. The New York Daily Times reported that several of Cyrus' fellow celebrities felt her performance was in bad taste. Alongside fans and reporters, even Robin Thicke's mother has taken her stance against the former Disney star's behavior.

In an interview with OMG!Insider, Gloria Loring stated, "I don't understand what Miley Cyrus is tryng to do. I just don't understand. I think she's misbegotten in this attempt of hers."

However, what has somehow been overlooked in the attack on Cyrus is Thicke's own role in the performance. OMG!The Blog points out that the only criticism Thicke has received surround the odd Beetlejuice inspired referee outfit he wore. The sexually suggestive lyrics that Cyrus twerked to were something of a controversy when the song was first released, but in the recent media storm the only negative focus have been directed at Cyrus. After Thicke's mother's comments, he comes off almost as the victim despite his own admission that he enjoyed the performance. Will Smith thought he was taking the family out for a nice pleasant evening on the town at the VMA Awards. And then Miley Cyrus took the stage. Will the Smith family ever recover?[/caption] Other jaws may have dropped at the sight of Miley's twerk-fest, but Rihanna seemed not so impressed.[/caption]