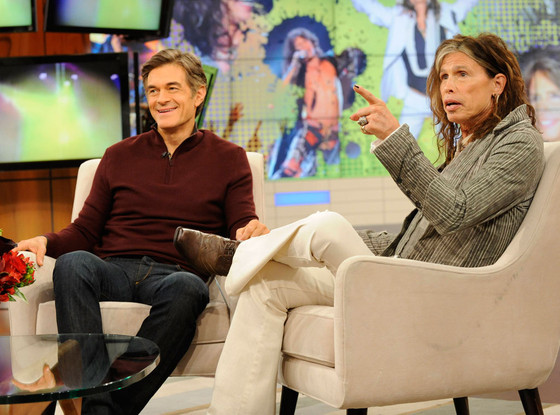 Steven Tyler has lived the dream most rockers can only dream about: enormous success. As part of the group Aerosmith, he has outlasted almost every other rock and roll bank. To date, Aerosmith has sold over 150 million CDs and records and is believed by some to be the most successful US rock band.

However, the rocker lifestyle took a toll on Tyler. He became addicted to drugs and the battle to overcome them has lasted most of his adult life. He told Dr. Oz that the drug abuse cost him "everything" including his marriage, children, and career. Tyler says it is difficult to remain sober because physicians nowadays are the equivalent of drug dealers.

"My sobriety cost me nothing less than everything," he explained. "I lost everything. It's serious. It's serious when you lose your kids, your children, your wife, your band, your job and you'll never understand why because you're an addict. You can't figure that out."

On Losing his children:

"Two of them never saw me high until about seven years ago. I had a bunch of operations and simply didn't follow my program, and I kept the drugs by the side of my bed so I just did more instead of doing what was prescribed. Remember I'm a very good drug addict because I've done it for so many years."

In one instance, Tyler recounted to Dr. Oz how he visited a doctor and explained to him how he was sober from drug use for a determinate period of time.

The doctor congratulated him for his sobriety and as Tyler was leaving the office, the doctor asked him if he would like a prescription to help him "sleep". Tyler, in his witty fashion, explained that if he takes anything "mood altering", it is nothing less than something he feels he has to "ride".

Here in Canada, you can catch the Dr. Oz show Weekdays at 5pm ET on CTV.

Related Topics:Steven Tyler
Up Next