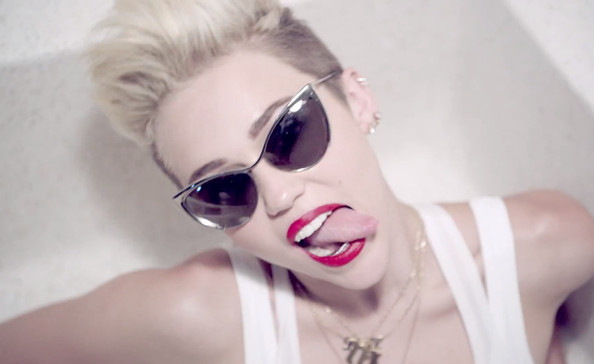 Singer Miley Cyrus has often been photographed with her mouth wide open, poking out her tongue to the side.

Her tongue poking hit the zenith of publicity during the recent MTV Awards Show presentation when she performed her infamous twerking and tongue poking alongside fellow singer Robin Thicke. But in a recent interview, Cyrus admits that she plans on retiring the gesture in future musical performances and videos.

She explains that her "Miley Tongue" as she refers to it is starting to get old because everyone else has been copying the gesture and she has decided it may be time to retire it from her repertoire.

"It's the new Miley tongue, it's kind of like my style now," Cyrus told French television show Le Grand Journal.

"They're all doing it, but it's getting a little old. I'm going to have to retire it!"

Cyrus also admits that although her tongue might seem to be very long in length, she has not been able to touch her nose with it even though she has tried to accomplish that feat on numerous occasions.

Cyrus' most recent video, "Wrecking Ball", broke VEVO Records as the most viewed video within a 24 hour period, totaling a little more than 19 million views to date.

Cyrus, who first rocketed to musical stardom in Disney's "Hannah Montana" franchise, promises that she will release a director's cut of "Wrecking Ball" when 150 million views has been reached.

Related Topics:Miley Cyrus
Up Next