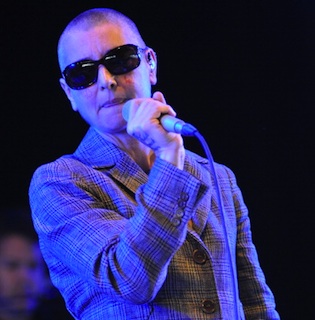 Even at forty-six, Irish singer Sinead O'Connor still manages to be quirky and a little controversial, at the very least she is baffling. On Friday, September 6 she appeared at the Bestival music festival with the letters B and Q tattooed on her face. The letters are positioned on her cheeks beneath her eyes rather prominently.

She vaguely revealed the meaning of the letters in a blog post on her website and that they are the initials of a gentleman named Brendan Quinlan. She then went on to write: "There's a bottle of Agent Provocateur in someone's room that Belongs to me."

No one is sure who Quinlan is. Last year on her blog following her hasty marriage and then separation from Barry Herridge she expressed that she was finished with romantic relationships entirely. According to The Irish Sun, mysterious Mr. Quinlan is a man who wronged her, but this is unconfirmed.

Her erratic as well as dramatic behavior over the years is likely the result of her bipolar disorder. In January of 2012 she also tweeted a series of alarming messages resulting in authorities being dispatched to her home. Later in April she canceled her tour because of her mental illness.

Block Miley Cyrus With The Help Of Google Chrome Extension