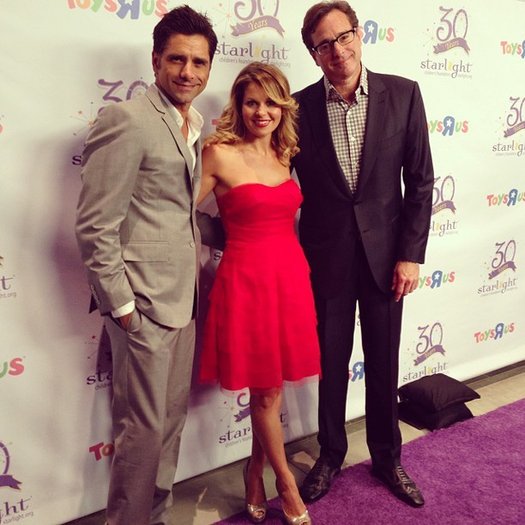 The Los Angeles Starlight Awards show came and went, but unbeknownst to many in attendance, three of the original cast of the popular syndicated family show "Full House" were in attendance and actually held a reunion of sorts.

Participating in the reunion was Bob Saget aka "Danny Tanner", Cameron Burr aka "D.J. Tanner", and John Stamos aka "Uncle Jesse". The three former cast members all concurred that the cast genuinely loved each other and that fact they said was evident "in between the lines" which added to the spirit of fun the show displayed.

Both Saget and Stamos admitted that to this day they are recognized by fans of show who call them by their TV show names.

"There was actually a lot of love, that's why the show's a hit," Saget, 57, told Us Weekly. "It was a nicely written kid show for 12-year-old kids, mostly girl friendly. Any cast that does well now is because there's stuff going on that's not in the lines where you can see there's a spark going on with them, and that's with the love of that show. This was a kid show and a family show so we all genuinely have affection, a love for each other."

"It is a part of culture and it's not going away," he added. "Little kids are watching it now like it just started, so it's really quite funny. The biggest compliment I get, me especially because I'm the oldest, is, 'You look the same!' I'm like, 'No I don't, dude, I'm all older and puffy,' but they're like, 'No, no.'"

Stamos said he's grateful for his time on the sitcom which ran from 1987 to 1995. In fact, Stamos has said he's never tried to run from his involvement on the show. Compare that with Miley Cyrus who goes out of her way to shed her "Hannah Montana" image.

"I've done so much work since then, but it just doesn't ever go away. I never tried to run from it, but I've really embraced it the last 10 years," he said. "I'm proud of it and then main thing is that I really feel that Full House helped a lot with Starlight and we helped a lot of kids through Full House through the Uncle Jesse thing to make a lot of kids happy. I could be called worse, right?"

Stamos, who at age 50, looks as if he's in his late 30s or early 40s confessed that he's only a year or so younger than George Clooney. Like Clooney, he's a bachelor and said he is fine remaining one for the time being.