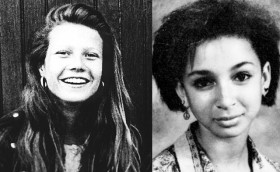 The Crossroads School for Arts & Sciences has seen their fair share of students go on to achieve fame and fortune. The college preparatory school boasts a list of famous alumni which includes Emily Deschanel of the long-running TV drama "Bones", her younger sister Zooey Deschanel of the TV sitcom "New Girl", actor Jonah Hill, and film director Michael Bay of the "Transformers" franchise. Among the other dozens of famous celebs from the school are actresses Gwyneth Paltrow and Maya Rudolph. In fact, the latter two were actually friends in school long before they were famous.

Patrow and Rudolph are peers with the latter actress being exactly two months older than her friend Gwyneth. Their high school photographs reveal that each was a beauty long before fans discovered them. Rudolph has largely achieved her fame in comedy from her eight seasons on Saturday Night Live and in films such as "Bridesmaids" and "Grown Ups".

Paltrow has done period pieces from her classic rendition of Jane Austen's "Emma" in 1996 and the 1998 film "Shakespeare in Love" for which she took home the Oscar for "Best Actress". However, Paltrow also won the Emmy Award for "Outstanding Guest Actress in a Comedy Series" for her guest-star appearance in an episode of "Glee".

Miley Cyrus Pregnant According to The Internet