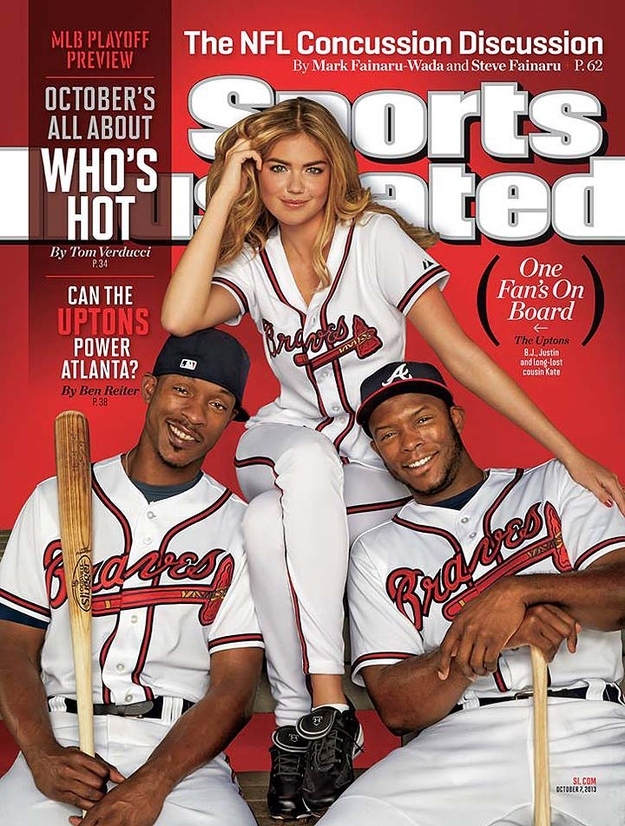 In a novel cover shot, Sports Illustrated’s latest issue features the Upton brothers B.J. and Justin side by side with 21-year-old supermodel Kate Upton sitting atop their shoulders.

The photograph is quite a sight to see with the stunning beauty featured in the center. Kate Upton has been on the cover of the Sports Illustrated Swimsuit Edition for the past two years. The Upton brothers both play for the Atlanta Braves and are featured wearing their uniforms along with Ms. Upton also sporting a Braves' uniform.

As Atlanta heads into the post-season playoffs, neither Upton brother can boast a particularly strong season. However, all that matters at this point is how they perform now. B.J. Upton underperformed this season given his $12 million salary. He struck out 151 times in 391 at bats and hit only 9 home runs. Both he and his brother broke the 20 home run mark the prior season.

However, this is the first season of B.J.'s 5-year $75 million contract with Atlanta and free agents often don't perform so well during their first year of big contracts.

Despite the cover shot, there is nothing in Ms. Upton's past to suggest that she is a baseball fan. In all likelihood, the shot was more of a well-timed sales pitch for the magazine.