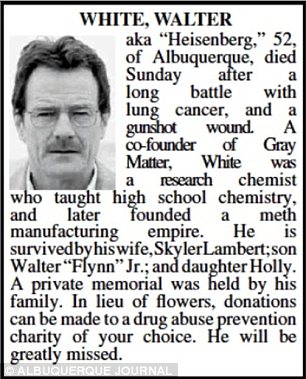 The hugely successful and critically acclaimed AMC series "Break Bad" about a terminally ill high school chemistry teacher called "Walter White" who turns into a murderous meth producer & dealer (Ew!) has come to an end. The series which began on September 20, 2008 completed its series finale on Sunday, September 29, 2013.

In the final episode, Walter White aka "Heisenberg" finally gave up the ghost after his struggle with small cell cancer of the lungs and a fatal bullet. The character was from Albuquerque, New Mexico and fans have taken out an obituary for him. The obituary states his cause of death (cancer & gunshot wound), his meth empire, and his surviving spouse and children.

The obituary states that his loss will be felt by many. Actor Bryan Cranston, who played the conscious constricted drug dealer, won three "Outstanding Lead Actor in a Drama Series" Emmy Awards for his portrayal of the character for the years 2008, 2009, and 2010.

Check it out below: Geri Irons In Her Knickers In “Spicy” Selfie