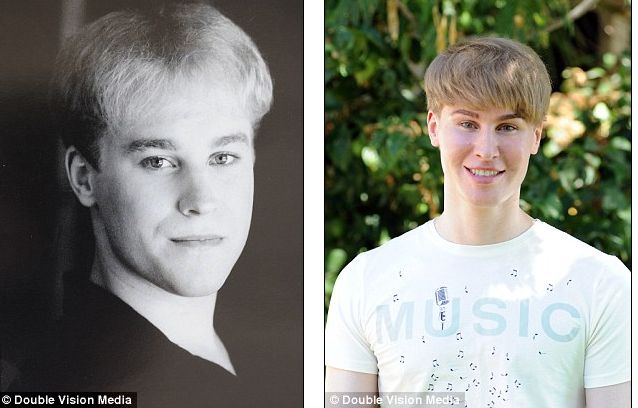 Bieber fan has 100K of plastic surgery to look like him[/caption]Bieber 2.0?

Thirty three year old, Toby Sheldon, has spent over $100,000 to look like his idol, Justin Bieber.

Sheldon, from Los Angeles, California, decided that he liked Justin Bieber so much that he himself wanted to look identical to him. It all started before the teen pop idol was a huge hit in 2003 when Toby wanted to do something about his thinning hair line. He spent over $8,000 on hair transplants alone but claims he still wasn't happy. In 2008, as Justin Bieber starting becoming more and more popular, Toby knew the exact look he wanted to go for.

He remembers taking a photograph of Bieber to his plastic surgeon, explaining he wanted Justin's look. After $21,000 worth of work, Toby had his hair line lowered, closed off his temples, and grew back his bangs.

'It took three transplants and a total of $21,000 to accurately lower my hair line, close off my temples and grow back my bangs,' he says.

Of course that wasn't enough for Toby, he wanted to be seen as an exact twin or as close as possible so he returned to the surgeon multiple times to complete his look.

After $100,000 worth of plastic surgery, Toby says he is still not completely satisfied with his look, insisting he will have more surgeries performed.

'By using Justin’s charming baby face as my inspiration, I’ve been able to restructure my entire look to maintain a much more youthful appearance through plastic surgery.'

Sheldon says he admires Bieber for his youthful good looks, if not his musical output.

'I didn’t necessarily listen to his music or fawn over him as a celebrity, but his face was just so flawless every change I made was modeled after him.'

What started as him wanting to achieve a more youthful look has apparently turned into a huge obsession.
[caption id="attachment_71808" align="aligncenter" width="650"] Unbeliebable: 33-year-old Bieber fanatic has $100k of plastic surgery to look like his idol
http://www.dailymail.co.uk/news/article-2468391/Justin-Bieber-fan-Toby-Sheldon-33-100k-plastic-surgery-look-like-idol.html