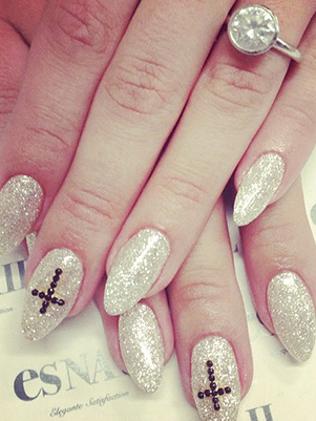 Kelly uploaded this picture of her manicured hands, which also revealed her engagement ring. Picture: Instagram[/caption]

Kelly Osbourne, who recently announced her engagement to marry Matthew Mosshart, admitted that she got the inspiration for her engagement ring design from an earring that her rocker dad Ozzy wore when she was just a young girl.

Kelly recalls that as a young child, she would put her finger next to her dad's bejeweled ear and exclaim that she wanted a ring that looked just like his diamond earring. Now she has one, custom designed by the exclusive Tiffany & Co. of New York City.

She shared a photograph of her latest bauble with loyal fans on Instagram, showing off hands manicured with nail polish that is almost as sparkling as her engagement ring. Osbourne also admitted that the circumstances of her baker boyfriend asking for her hand in marriage proved very romantic.

The two were on a holiday in Anguilla at the end of last year when Mosshart stood on a balcony and popped the question.

Osbourne was no doubt over the moon but managed to keep the engagement secret from the public until she was ready to premiere the Tiffany-designed and Ozzy Osbourne inspired round diamond engagement ring. No date has yet been announced for the nuptials.

Related Topics:Kelly Osborne
Up Next