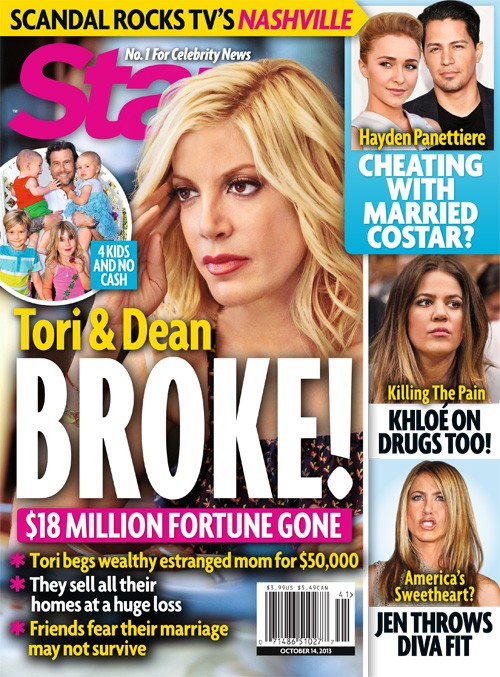 In the latest edition of Star Magazine and according to a recent report by MSN, Tori Spelling, former star of "Beverly Hills 90210" and heiress to the Spelling fortune, has reported being broke. Of course, it should be noted that broke to a Hollywood stalwart is a relative thing.

While Aaron Spelling's empire was estimated to be worth about $500 million around the time of his passing, Tori has always elected to live by her own means. She recently starred in her own reality show, "Tori & Dean: Home Sweet Hollywood", with husband Dean McDermott. Since her days on "90210", Spelling and her husband had reportedly amassed a net worth of approximately $18 million. However, reports are the money has been squandered since the cancellation of her series.

According to Spelling, "We're in the entertainment business, and things change year to year."

The former teen star reveals more details about her money issues in her new memoir, Spelling It Like It Is, which hits shelves Tuesday (Oct. 22).

"It’s no mystery why I have money problems," the mother-of-four writes in an excerpt obtained by RadarOnline.com. "I grew up rich beyond anyone’s wildest dreams. I never knew anything else. Even when I try to embrace a simpler lifestyle, I can’t seem to let go of my expensive tastes. Even when my tastes aren’t fancy, they’re still costly. I moved houses to simplify my life, but lost almost a million dollars along the way."

Reportedly, other things contributing to her financial woes are a series of bad real estate and business investments. Perhaps, the most interesting part of her situation is the inability to afford a vasectomy for her husband. That can be very problematic when you are broke and already trying to care for 4 cute little kiddies. Only in Hollywood?

Bon Jovi Gets First Banner at Air Canada Centre But Did They Fudge The Numbers?