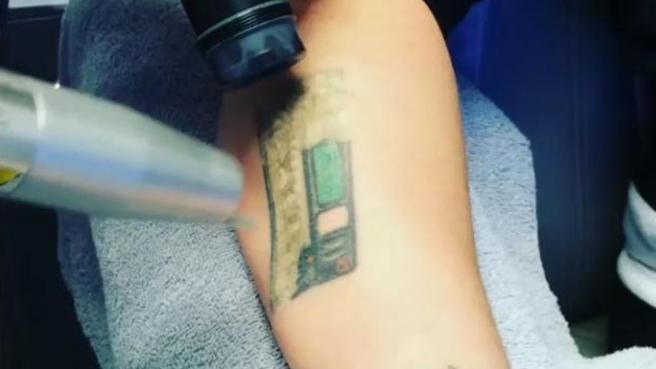 Just as Miley Cyrus is showing off her newest tattoo, Kelly Osbourne has begun the painful task of having her 15 tattoos removed. She has also decided to film the process.

This week she posted the very first video (to her Instagram account) of the tats coming off. She chose to have a tattoo of a piano removed first, because she claims she has no idea why she ever got that one!

The caption to her feed was "I did the crime I am now doing the time!" And no doubt she is feeling the pain, as the process is not a walk in the park. You can hear the doctor telling Kelly she's doing fine, even as you hear Kelly's cries of distress.

Kelly says most of her tattoos were mistakes, but she will keep some, such as the one she has that matches the one her brother, Jack, has.

Kelly actually admists that her tattoos were a way of harming herself. ‘When I was younger I really do think that tattoos were my way of self-harming because I really knew it would upset my mum and dad,’ she said, ‘I was miserable and I just went and got all these tattoos and I don't know why."

One of them is that very piano she had removed this week.