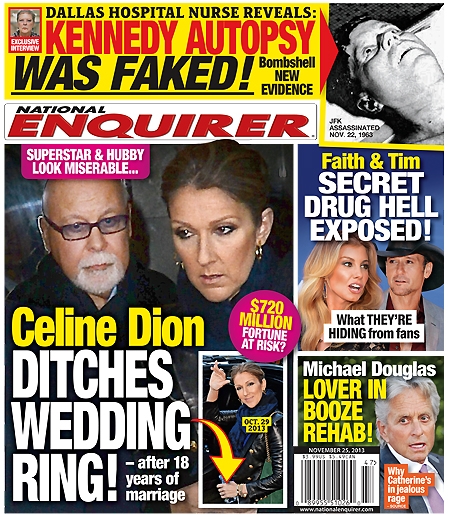 The tabloid magazine "The National Enquirer", long known for its journalistic integrity and ability to tell the truth, is insinuating that Canada's most successful music artist Celine Dion is breaking up with her husband of 19 years. The story is based on a photograph recently taken of Dion without her wedding ring.

Well, it has been true that for some people the absence of a ring has turned out to be proof positive of a breakup, but Celine Dion is not Miley Cyrus. The "ringless" sighting is reported to have occurred on October 29. Dion is currently living in Las Vegas with her 71-year-old husband René Angélil and their two children. Dion is under a lucrative singing contract in the gambling town that by some estimates may be netting her over $100 million annually.

Dion, the talented 45-year-old singer from Charlemagne, Quebec, has sold over 200 million records during her 24 year music career. Her latest CD entitled "Loved Me Back to Life" was released just this month and is her first English studio release since 2007. It features duets with Ne-Yo and Stevie Wonder. Her 2012 French-language album "San Attendre" (Without Waiting) sold a respectable 1.5 million copies worldwide.