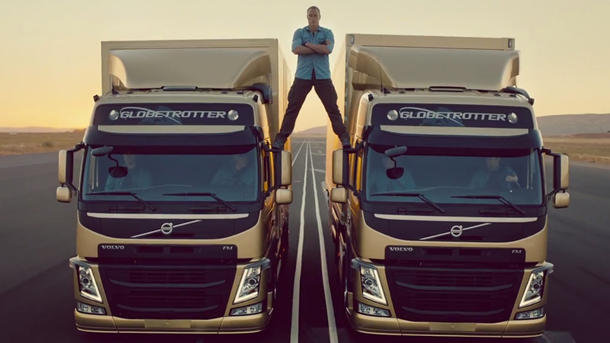 Think 53 is over the hill? Jean-Claude Van Damme will make you think again.

The action hero and martial artist shocked and amazed fans and critics with a stunt he performed in a new Volvo FM truck steering precision and directional stability test video released on YouTube today. In Live Test 6, Van Damme stands with his arms crossed and eyes closed as the sun sets behind him. His voice provides narration as the acoustic strains of Enya's “Only Time” play.

As Van Damme explains that his body has been perfected to "defy the laws of gravity" and “master the most epic of splits,” the camera pans back to reveal that he is standing on the side mirrors of two FM trucks moving backwards and slowly separating apart.

As Enya's vocals begin, the truck on the left pulls further away and Van Damme performs one of his famous splits between the trucks with his legs completely outstretched.

Although safety measures were taken, Volvo states it did not use special effects. The "Epic Split" was performed entirely by Van Damme in one shot during a brief 15-minute window of light on a deserted Spanish airfield.

JEAN-CLAUDE VAN DAMME DOES THE SPLITS BETWEEN TWO VOLVO TRUCKS AND IT'S SPECTACULAR
http://www.fastcocreate.com/3021674/jean-claude-van-damme-does-the-splits-between-two-volvo-trucks-and-its-spectacular

For Jessica Chastain Dad Is a Forever Word