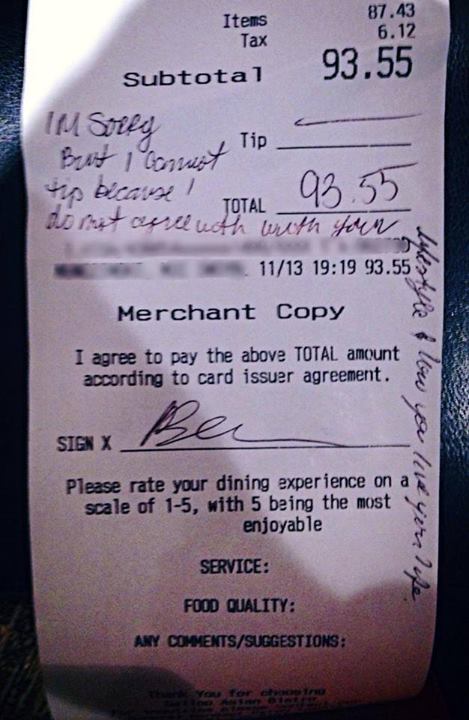 The note left for Dayna Morales (Picture: Facebook/Have A Gay Day)
[/caption]Gay Waitress Stiffed on Her Tip for Being Gay

Bridgewater, NJ - When waitress Dayna Morales picked up the customer receipt on one of her tables at the Gallop Asian Bistro, she got something quite different from a tip. Morales, a who is a lesbian and a former Marine, was rebuked by the family who jotted a note on the receipt stating that her tip was withheld over their disapproval of her gay lifestyle.

In retrospect, Morales could have seen the homophobic response coming when the mother was surprised to hear the waitress announce her name as "Dayna". The mother stated that she had expected Morales, who has her hair "butched", to announce herself as "Dan". The family consumed $87.43 worth of chow at the bistro and didn't make any comment regarding the promptness & quality of Morales' service.

Morales posted a partial picture of the receipt which showed the handwritten rebuke. She expressed feeling personally offended that fellow Americans whom she defended while a soldier would treat her in such a manner.

Morales expressed her disgust over the incident in her email to Have A Gay Day. The email, later posted to the site's Facebook page, read:

I am THOROUGHLY offended mad pissed off and hurt that THIS is what her kids will grow up learning and that I served in the Marines to keep ignorant people like them free. Sorry lady but I don't agree with YOUR lifestyle and the way you're raising your kids but you didn't see me throwing that in your face and giving you shitty service. Keep your damn mouth shut and pray we never cross paths again.

Facebook users offered their support to Morales in response to the post. "As a member of the heterosexual community, I beg your forgiveness for these ignorant people," wrote one person. "I always tip 15% to 20% no matter who my server is, what my server does out side of the place is none of my business," wrote another.

Sadly, she is in very good company. Recently, a waiter at a Carraba's restaurant in Kansas was likewise stiffed. His customer receipt also included slurs regarding his homosexuality. The restaurant patrons were Christians and believed their disrespectful actions pleased God.

mcdonalds drive thru could be much faster in the near future