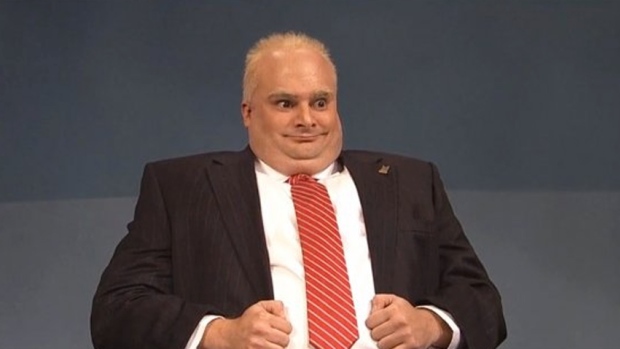 SNL Rob Ford Skit Pokes Fun Of Troubled Mayor (VIDEO)[/caption]Toronto Mayor Rob Ford has been a popular topic on late night TV and over the weekend, SNL took its turn.

The NBC program parodied the mayor's repeated public apologies for his behaviour and comments.

In total, the skit was just over 4 minutes long.

During one of these appearances, Moynihan’s Ford character tells the gathered press: “I brought some Chapstick for everybody and I would love for you to put it on before you kiss my fat f****** white a**!”

The Ford character would issue a chastened apology for actions unbecoming.

“Yea. I should have not have said that part,” he says. “I really goofed up. But I realized that and I apologized at a press conference only a few hours later.”

SNL now joins a long list of late night shows that have poked fun at our mayor, including those of David Letterman, Jay Leno, Jimmy Kimmel, Jon Stewart, and Stephen Colbert.

The program aired on NBC and Global.