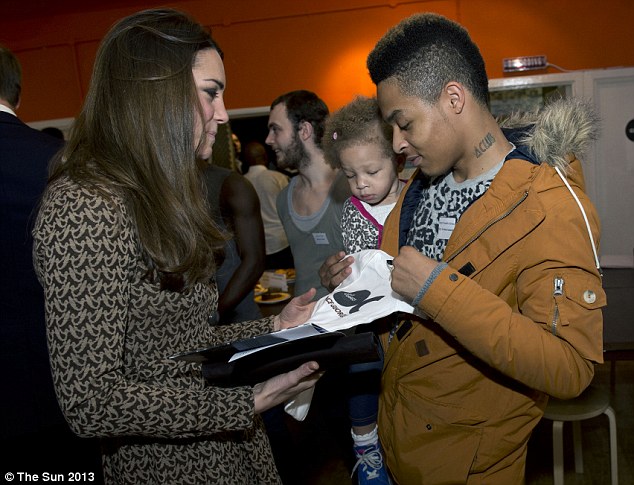 Delighted: The Duchess beams as Mr Russell-Andrew unfolds the tiny black and white garment for her to see[/caption]

The Duchess of Cambridge has said that her son George, now aged four months, is growing up very fast. Kate Middleton made the statement that many young parents become aware of as she was receiving a personalized gift from an ex-convict, Aaron Russell-Andrews.

Russell-Andrews was able to commiserate since he has a 20 month old daughter of his own. Kate and Prince William were touring Only Connect, a charity located in northern London.

They had been invited to the charity's center to learn more about how the group supports ex-convicts and others, particularly youth, who might be at risk of committing further criminal activity. Russell-Andrews is a success story of the organization, having become a professional actor after committing vehicle theft and burglary four years ago.

Russell-Andrews gave the new mom a personalized onesie to give to Prince George. The adorable outfit was a size 3-6 months, which she dubbed a "very good fit."

At one point in the exchange, Russell-Andrews' daughter apparently got a little jealous over the onesie. "Teegan tried to take back the babygro, she's very cheeky," he said. Gift: Mr Russell-Andrews and his baby daughter Teegan present the Duchess with a babygro for Prince George
[/caption]

Middleton sympathized, "They're very demanding at this age."

Kate and Prince William have a familial connection to the supporters of Only Connect. Lady Jane Fellowes is the older sister of Diana, William's mother and Princess of Wales, and is also a trustee of the organization. This connection is not what prompted the couple to learn about the organization. Their interest in helping the youth of their city inspired them to visit the charity, not the connection through Lady Jane Fellowes.

During her two-hour long visit, Middleton also tasted cakes made by trainees from Switchback, a homelessness charity that aims for rehabilitation through catering. .

Kate Middleton on Prince George: Growing Up SO Fast! - See more at:
http://www.thehollywoodgossip.com/2013/11/kate-middleton-on-prince-george-growing-up-so-fast/

Related Topics:Kate Middleton
Up Next