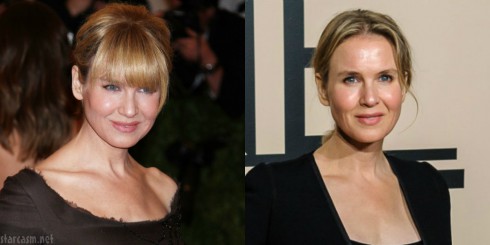 Did Renee Zellweger Get Plastic Surgery?[/caption]

Did Renee Zellweger Get Plastic Surgery?

On November 2 when Renee Zellweger emerged for the premier of "Long Shot: The Kevin Laue Story" she was nearly unrecognizable. The forty-four year old actress attended the event at the AMC Burbank 16 theater and has had people talking since. She also appeared for an event in NYC further shocking fans.

She has been spending more time behind the camera rather than in front of it and her new face is dramatically slimmer. Her skin is extremely smooth, particularly her brow. Her trademark squinty eyes were also not at all squinty. For the movie premier she was wearing little makeup and was dressed down overall in jeans and a peacoat. She posed for a number of pictures with Kevin Laue - the subject for the movie, which contributed to the buzz.

Some are saying that Zellweger's changing appearance is due to weight loss and not cosmetic surgery. She is one of many Hollywood stars to dramatically gain and then lose weight for her roles, most notably for her part as Bridget Jones in "Bridget Jones' Diary." Anthony Youn, M.D. said to Extra that she may have hadbotox injections in her forehead, which are making her brow more relaxed and causing her eyes to be wider.