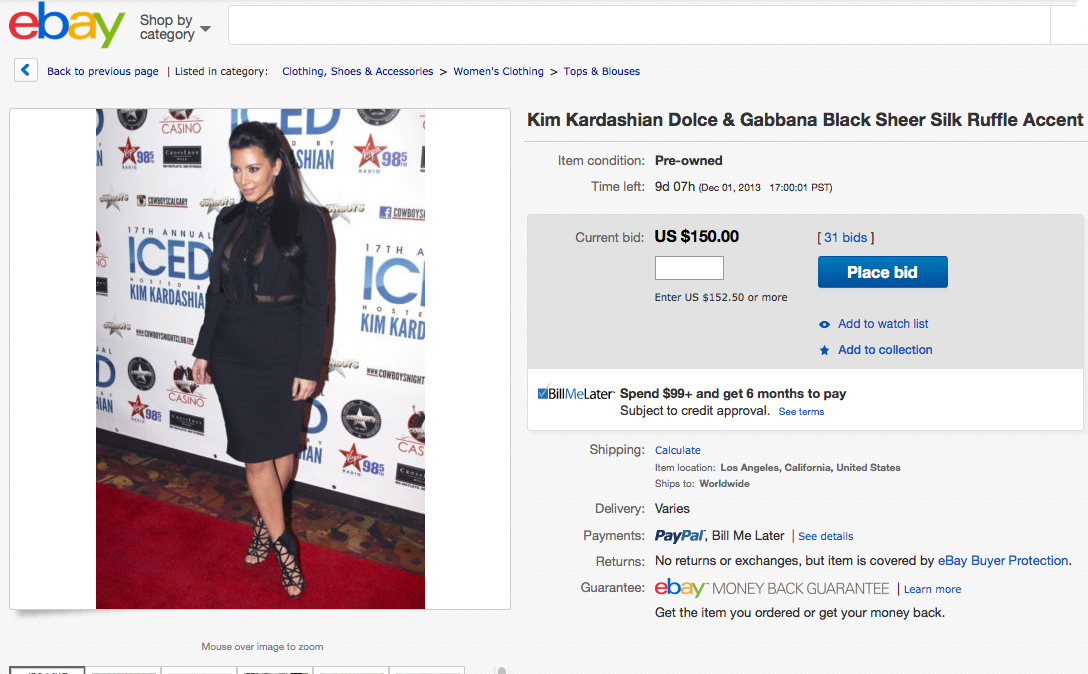 Kim Kardashian certainly knows how to keep the cameras and headlines focusing on her every movement. This time the news has nothing to do with videos, babies or engagement rings. The sultry reality star is promoting an online charity auction of some of her fashions, personal belongings and photos.

According to Kim K she will donate a percentage of the profits to a worthwhile cause. She plans to send money to help the typhoon victims in the Philippines. Unfortunately many people forgot how this Kardashian sister handles the money that results from her numerous charity auctions.

The 33-year-old reality star tweeted a link to a letter posted on her personal website touting her fundraising efforts.

"Hi guys, this is a very special auction because a portion of the proceeds of my eBay auction are going to International Medical Corps, a nonprofit organization that provides critical health services on remote islands where families are struggling to access medical care and basic resources like food, clean drinking water and vital medications."

"The proceeds will go directly to the communities they’re serving in the Philippines and will help typhoon survivors get access to medical care and ultimately save lives," she noted before adding, "My prayers and thoughts are with those affected by the typhoon. Check out my eBay auction here and support those who need our help in the Philippines. Xo."

She did not mention that that "portion" was a measly 10 percent. The charity auction is expected to bring in millions.

According to Glenn Selig, President/CEO of Selig Multimedia, "Many times the public assumes that all the proceeds go to charity and not the celebrity, but that is often not the case. The public should never assume that 100 percent goes to charity."

In January of 2012 reports were already circulating about Kim's immense windfalls from her charitable efforts. When Kim asks her fans and followers to dig deep and donate to an auction she is going to reap 90% of all the funds. This means that she is only going to part with a scant 10% when she has to make that "charitable donation."

The Kardashian clan say any donation is better than no donation at all.

"They strongly believe that every little bit counts and there have been many instances where they have privately donated the whole sum of an earning to a charity, and they would like to continue to do some of these things privately," an insider told Fox.

A rep for the Dream Foundation said the donations of the Kardashian family are always welcome in any amount.

"Kim has contributed hundreds of thousands of dollars to Dream Foundation, and more importantly, has always made herself available on a personal level to hold the hand of a dream recipient battling terminal illness," the rep said. "Regarding the online auctions, 10 percent is significant when considering the number of dreams that have been fulfilled as a result, and we are grateful for Kim's loyal support."

While $4 million is certainly nothing to be "sneezed at", it should make potential contributors wonder if they could do better with their money by donating it directly to the charity themselves.