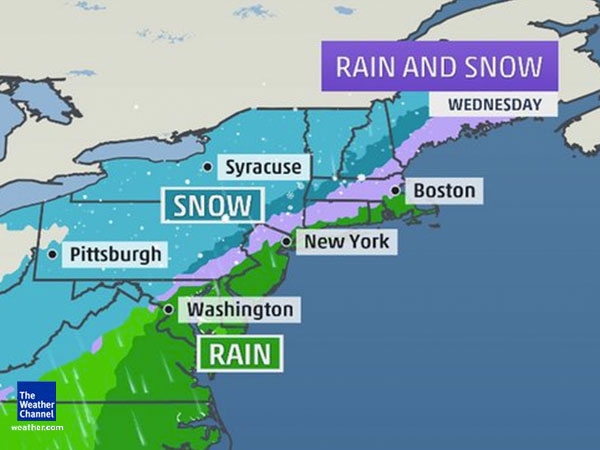 Travelers who wait until the Wednesday before Thanksgiving to make their way home may find that severe storm systems make roadway travel dangerous and airline travel delayed. Weather forecasters are predicting that there could be extensive flight delays throughout the Northeastern U.S. starting Wednesday, November 27 due to low-level clouds, rain showers and even snowfall. Almost two and a half million people already have air travel plans for the day before Thanksgiving.

“We’ve been lucky the last few years, but unfortunately this is a rather poorly timed storm,” said Jonathan Erdman, senior meteorologist at the Weather Channel.

The effects of the current fast-moving winter storm are affecting both west and east coasts and travel delays are anticipated from the Plains states through Maine.

Officials at the Weather Channel indicate they don't believe it will develop into a major snowstorm but caution everyone who is traveling to take extra precautions due to poor visibility as well as icy roads.

Travelers are being advised to advance their travel plans and begin their journeys no later than Tuesday morning if they want to avoid delayed and cancelled air flights and encounter clear driving conditions.

According to NBC News, more than 2.4 million people are expected to have flights scheduled the day before Thanksgiving, according to Airlines for America, an airline industry group.

By Tuesday afternoon, there is the possibility of snow arriving in the Northeast beginning around Washington, DC.

“If you’re headed to grandma’s house Thanksgiving morning, it’s still going to a dicey drive in the Northeast in general,” Erdman said. He added that scheduling early travel for this weekend, before the storm hits, would be best for travelers.

“Probably the last chance to avoid any significant travel delays would be Tuesday morning in the Northeast, even Monday and early Tuesday,” he said. “You’ll save a lot of grief.”

Thanksgiving Day is predicted to be storm-free, but many travelers may not make it home in time for turkey dinner.