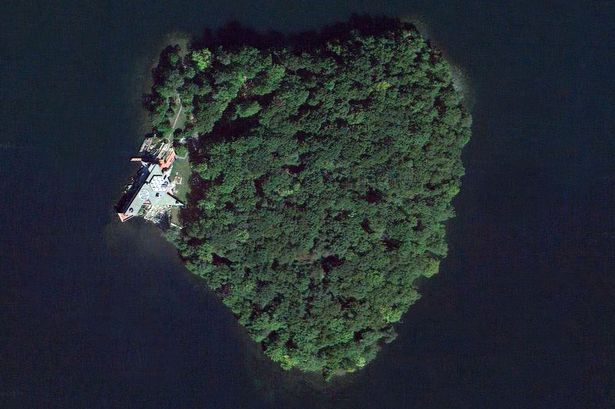 What's a girl to do when her sweetheart reaches his 50th birthday? If you are actress and philanthropist Angelina Jolie, you purchase Brad Pitt an 11 acre island in the shape of a heart.

“As soon as Angelina heard the island was on the market she arranged a viewing — she was really impressed,” a source told the UK Mirror. “The house is perfect for romantic getaways or as a family retreat. It’s very private.

“And Angelina knows the fact the island is in the shape of a heart will mean so much to him.”

Not only is the island of Petra located right off the coast of New York City, it also features two structures which were designed by noted American architect Frank Lloyd Wright who happens to be Pitt's favorite designer. Several years ago, Jolie treated her soon to be spouse to a tour of Wright's famous Fallingwater house and just three years ago purchased an actual waterfall for him in California so he could design his own Wright-inspired mansion nearby.

Although the island is isolated and sure to provide the right amount of privacy for Jolie, Pitt and their brood, it comes already equipped with a helicopter pad for easy access. Wright's cottage was constructed on Petra in 1950 with another main house added five years ago using plans developed by the famed architect.

The reported purchase price was well over $9 million. But money was no object to Jolie, who knows that the island's heart shape as well as its connection to Wright have special meaning to Pitt.