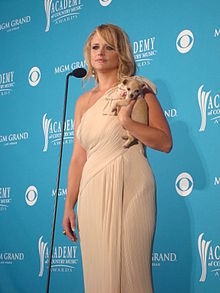 Miranda Lambert has recently lost a significant amount of weight. Many are speculating that she lost her weight by having a weight loss surgery. She has dropped a whole dress size, and she is not keeping track of the exact amount of weight that she has lost. She believes that weight is not about a number, but about how happy and healthy you feel. She said that her mission was finally accomplished when her slim jeans began to feel baggy. Lambert has recently wrote a letter to her fans saying that she lost all of her weight in a healthy way.

In her letter, she states that she does not care about what the tabloids write, but she would like to clear up some of the rumors. She stated that she did not have a surgery. She believes that this rumor is a ridiculous idea that was fabricated by the tabloids. Lambert shares with her fans that she just began to eat healthier and began working out with her trainer, Bill Crutchfield.

Miranda Lambert says that she is proud of her size. She loves being "normal sized" and is very confident with her current body weight.

Though I NEVER care what the tabloids have to say about me… I wanted to address this certain story they are running this week and set the record straight. I DID NOT have surgery to lose weight. That is ridiculous. I lost my weight the healthy and good old fashioned way. Watching what I eat and working out with my trainer Bill Crutchfield. As for the assumed number of pounds lost…? I don’t even know! Like I have always said, it’s not about a scale, it’s about how you feel and how your jeans fit. And on November 10th when I turned 30, my skinny jeans were finally baggy! Mission accomplished! So for anyone who is tempted to read the “Trash Talk” please don’t. I am proud to be a normal size girl and I want to encourage everyone to be confident at any size. Thanks for the support yall!

Macaulay Culkin Out With New Girlfriend In Paris