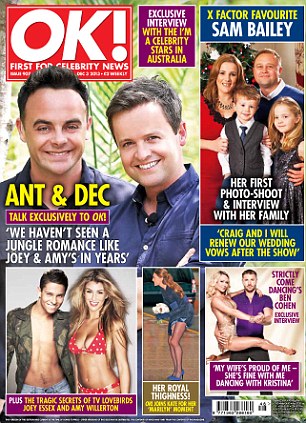 The full interview appears in this week's OK! magazine
[/caption]English actress Kirsten Wareing, who plays the regular character "Kirsty Branning" on the popular UK soap opera "Eastenders", was recently interviewed by OK! Magazine and she opened up about a miscarriage she suffered while on the set of the show.

Wareing, who joined the popular soap opera in 2012, was four months pregnant at the time she lost her child. She expressed her gratitude for the compassion fellow cast members and the program's producers showed her. Still, it has been a difficult experience for her as she longed for motherhood and the child was sufficiently developed for her to have a photograph of it from the baby scan.

She stated that she was pregnant when signed on with the show and feared that the pregnancy would cause her to lose her job. Instead, the show planned to keep her on the set for six months. Her miscarriage occurred before that period ended. Wareing ended up being a regular cast member until a recent shakeup of the cast resulted in her character being written out of the script. If there is one thing that has surprised her, it is the fame that comes to regular members of the show.

On The Web:
'I had a miscarriage on set': Kierston Wareing opens up about secret heartache and the real reason she left EastEnders
http://www.dailymail.co.uk/tvshowbiz/article-2513433/Eastenders-Kierston-Wareing-plays-Kirsty-Branning-opens-miscarriage.html