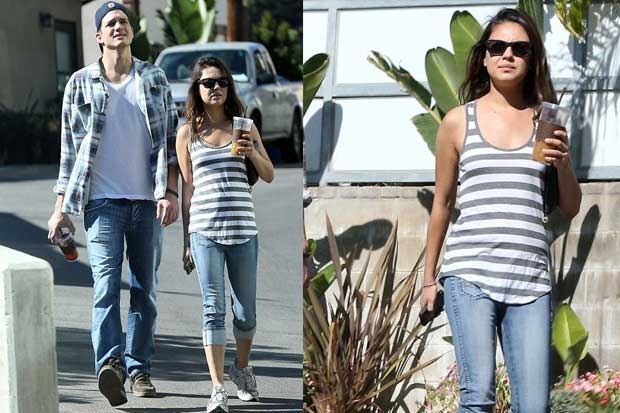 Actor Ashton Kutcher cracked down on the paparazzi this past week and some are now asking if he and girlfriend Mila Kunis are trying to cover up a pregnancy.

On November 25, the 35-year-old Kutcher exited Hollywood's Carlitos Gardel Restaurant and tried to force the paparazzi to leave. He got into their faces and walked around the street repeatedly telling them to “Get lost.” In a video of the event, the paparazzi were belligerent as they told him that they were in a public street and could photograph and film him.

Kutcher then unlocked his car and lead them to a different area of the street as Kunis and another woman slipped past behind him with Kunis holding the side of a white button down shirt across her upper body and face. Seeing the 30-year-old actress, the paps ran around Kutcher and right up to the open car door. They continued to photograph and film while smiling and laughing about the couple's efforts.

Several sources though say Kunis is not pregnant. If they are correct, the incident could have been nothing more than the result of Kutcher not wanting the paparazzi harassing his girlfriend any longer.

On The Web:
Nothing icy about these two! Ashton Kutcher wraps his arm around Mila Kunis after cosy dinner together
http://www.dailymail.co.uk/tvshowbiz/article-2513627/Ashton-Kutcher-wraps-arm-Mila-Kunis-cosy-dinner-together.html