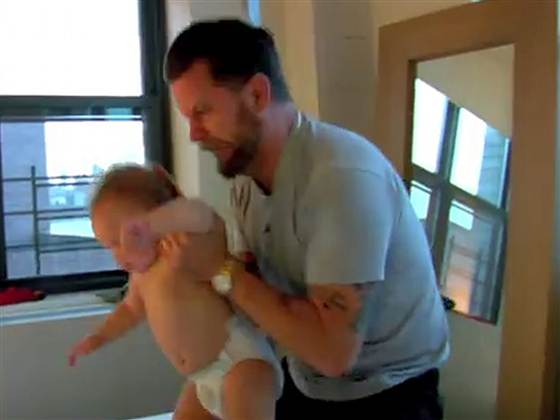 Comedian Gavin McInnes literally pulls no punches for parents in his short instructional video which has gone viral and is titled "How to Fight a Baby". Well, that is the name being given to the clip. In actuality, he refers to his instructional video as "How to kick a baby's something that rhymes with grass".

So what are the steps parents need to know to open up a can of whoop-ss on their otherwise cuddly little toddler? McInnes demonstrated the power-slam or body-slam on his own baby by slinging the toddler on his shoulder and flipping it on its back while slamming it on a comfy bed with a fluffy down cover. Next, he demonstrated the sleeper hold, which his baby seemed to endure quite well.

“A lot of you out there are scared of babies,” McInnes says in the video.

“They are easy-pease to handle, I’m gonna show you how.” Tickling is another skill parents need to remember. However, it is wind that is the surefire way to let the baby know who’s in charge. McInnes demonstrated this by blowing air into the baby's face which took the toddler of its game.

However, as any good self-defense instructor knows, combat isn't only about going on the offensive. A good warrior needs to know how to take a punch as well. McInnes demonstrated to parents that baby punches, kicks, and scratches do not hurt.