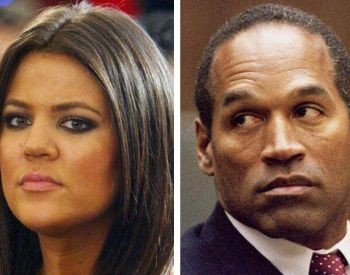 The manager of former football great turned murder suspect, O.J.Simpson, is claiming that Khloe Kardashian may be Simpson's daughter and not the blood offspring of now deceased Robert Kardashian. Norman Pardo admitted in a recent news media interview that the truth about Kardashian's paternity will soon be revealed and he hinted strongly that O.J. Simpson, who was best friends with the 29 year old reality star's parents at one time, may in fact be her true biological father.

“It’s all going to come out sooner or later,. Khloé could be O.J.’s kid. They all took their vacations together. There was a lot of partying going on back then. Kris cheated on Robert — she was known for having a good time.”

Robert Kardashian Sr. (who died of esophageal cancer in 2003) was one of several of Simpson's "Dream Team" of attorneys who represented Simpson when Simpson was accused of the 1994 murders of his ex-wife Nicole Brown Simpson and her friend Ronald Goldman.

This is not the first time that rumors of an O.J. Simpson and Khloe Kardashian connection has surfaced. Pardo acknowledges that whenever he asks his client to comment about the matter, Simpson merely laughs. Simpson is currently imprisoned in Nevada, having been sentenced to a minimum of 9 years there after being convicted of armed robbery and kidnapping related to supposedly stolen memorabilia. Simpson stood trial in Los Angeles on first degree murder charges in the death of his ex-spouse Nicole in 1994. Pardo insists that the Kardashians and the Simpsons were once very close friends who partied a lot together and that Kris Jenner cheated on her husband with the NFL sports legend shortly before announcing that she was pregnant.