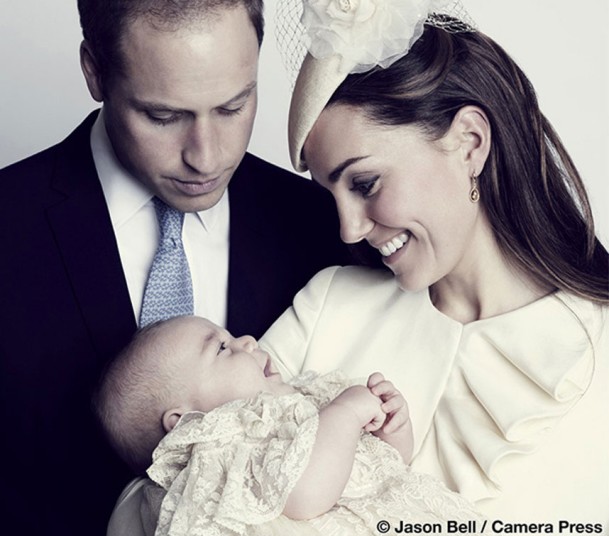 A newly-released official portrait of the Duke and Duchess of Cambridge with their son, Prince George Alexander Louis of Cambridge, following his christening in London on October 23
Picture: JASON BELL/CAMERA PRESS[/caption]Prince George recieves cows, among other creatures, as Christening gift

Prince George had it all at birth and now, after a thoughtful gift from a Kenyan Tribe, he now possesses a small herd of animals. On November 29th, the child heir received a christening gift including: four heifers, a bull, and a goat from the Samburu tribe in Kenya.

The Duke replied to this thoughtful gift with a letter of sincere thanks while referencing how grateful he was for the time that he spent with the tribe those years ago. He refferred to the christening gift, in his letter, as a "pension".

"Thank you all so very much for the extraordinary honour. I remember my time with you with immense happiness and I could not be more grateful to you all for this kindness," Prince William wrote in his thank you note.

"It brings me great joy to know George's 'pension' will be herded on a land we care deeply for. We hope one day he will be able to see them for himself," the 31-year-old Duke added.

The animals are to be raised in Lewa, Kenya, until little George is old enough to visit them. Not coincidentally Lewa is where Prince William proposed to his wife.

The Duke also took this opportunity to shine the spotlight on the issue of extinction that animals all over the world now face. He said, "The possibility of extinction is bad enough for one of our children growing up here in the West, who never experience the magic of seeing a rhino."

William added that he looked forward to continuing his visits to Africa and lauded the country as a place where he and his wife found love.

"Like any new parents, our thoughts inevitably turn to the world that our child will inherit," he said recently. "It is unfathomable to imagine a world in which children who have been born in the past couple of months may grow up in a world in which rhinoceros have ceased to live in the wild."

"The possibility of extinction is bad enough for one of our children growing up here in the West, who never experience the magic of seeing a rhino," he continued, "or even for my own little George, who Catherine and I very much hope to introduce to east Africa -- a place we know and love -- in the fullness of time."