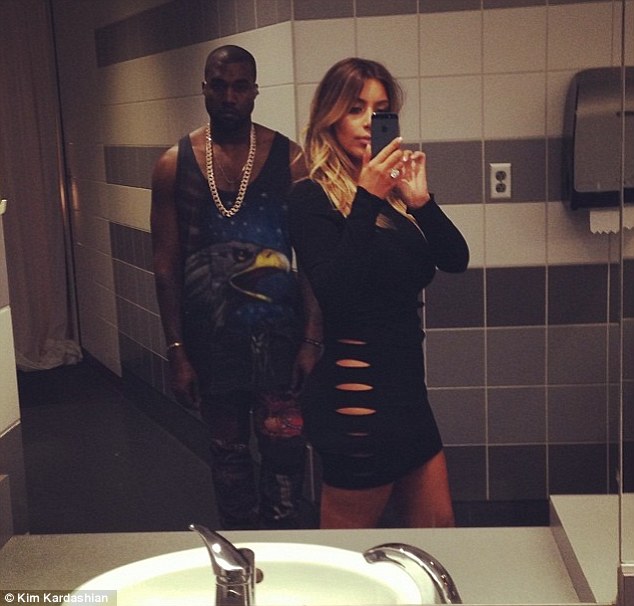 Looking good! The mother of one flaunted her post baby body in a sexy fitted black cut out dress
[/caption]Kim Kardashian's New Selfie

Kim Kardashian is well-known for her self-taken portraits, or selfies. She has taken ones of her seemingly without makeup after leaving the gym and while pregnant. She even took one in a sexy white swimsuit that sparked heavy criticism for being too revealing.

This time, on Friday November 29, Kardashian took a selfie in a bathroom at one of her fiance Kanye West's concert venues that has added yet another mixed message to her self-publicity portfolio.

The fact that a rather serious-looking West is in the bathroom with her doesn't appear to be the source of any head shaking. West was dressed in his standard recent concert gear of metal neck and wrist chains, jeans and a multi-colored shirt featuring patriotic symbols.

Instead, the image posted to Instagram revealed a bit too much:

Kardashian wore a tight, form-fitting LBD black dress with cut horizontal openings at the sides of her hips that seemed to confirm she wasn't wearing underwear.

Some people immediately criticized Kardashian's choice of dress, while others thought it was the perfect ensemble for the night. If Kardashian had worn underwear, even a nude or string style, the undergarments would have been even more noticeable. Kim Kardashian forgoes her underwear to slip into daring cut-out dress... then poses for selfie in a bathroom with Kanye West
http://www.dailymail.co.uk/tvshowbiz/article-2515930/Kim-Kardashian-wears-daring-dress-poses-selfie-Kanye-West.html