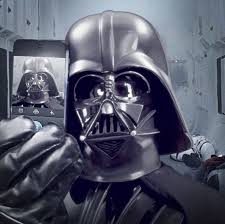 Darth Vader Selfie: The Dark Side Never Looked So Good[/caption]Selfies Have Officially Hit the Dark Side

Watch out internet users: selfies (a picture you take of yourself, usually at a downwards angle) have now been embraced by the dark side.

Darth Vader is officially on instagram, and more than that- he is posting selfies.

This past Monday, December 3, Star Wars joined instagram to drum up interest for the new movie Star Wars: Episode VII says Entertainment Weekly. His post included the caption ‘Another day at the office’ #StarWars #DarthVader #selfies #gprom under a looming shot of Vader taking a selfie on his iphone, the background has fallen bodies and dead clones in a futuristic looking corridor.

The new Disney movie will be hitting theaters on December 18, 2015 so fans have a long time to wait.

However over the next 2 years there may be the whole cast of familiar Star Wars characters posting on the instagram page, along with some hopefully new faces. This will be the first new film since 2005’s Star Wars Episode III: Revenge of the Sith, it is due to begin production in the spring of 2014 and is set after the death of Darth Vader.

According to TV Guide, the feed has already attracted a large amount of followers, in numbers over 120,000.

What do you think of the Darth Vader Selfie?

On The Web:
Entertainment Weekly: http://popwatch.ew.com/2013/12/03/star-wars-makes-official-instagram-account-darth-vader-posts-his-first-selfie/