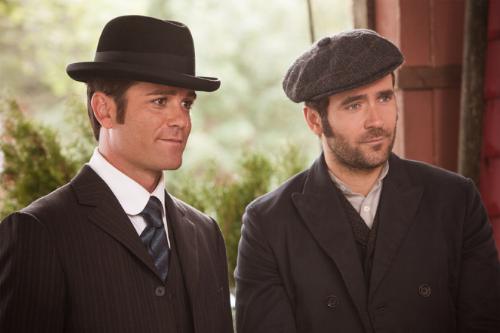 Popular Show Murdoch Mysteries Will Be Available for the First Time Beginning in December on Netflix. (PRNewsFoto/Netflix, Inc.)[/caption]BEVERLY HILLS, Calif - Netflix, Inc. (NASDAQ: NFLX) today announced the extension and expansion of its licensing agreement with the Canadian Broadcasting Corporation (CBC). The expanded licensing agreement includes new seasons of currently available CBC TV shows on Netflix, including Republic of Doyle, Heartland, Mr. D, Dragons' Den and other titles. Additionally, the deal will add CBC fan-favorite Murdoch Mysteries to the service for the first time. Beginning this December and continuing through 2014, new shows and seasons will be available to Canadian members.

"These shows represent some of Canada's best home-grown television," said Sean Carey, Vice President, Content Acquisition at Netflix. "Working with the CBC is part of our commitment to bringing Canadian subscribers the best of Canadian films and TV shows."

"Through this agreement Canadians will continue to enjoy a range of CBC programming on Netflix," said Bob Kerr, senior director, Licensing Division, CBC Revenue Group. "We are delighted that Netflix continues to invest in CBC as a provider of high quality Canadian content."