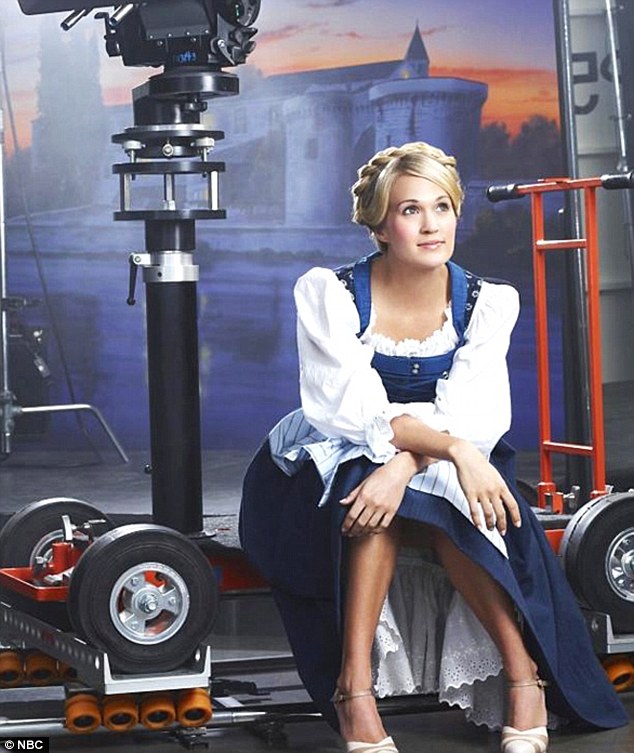 Carrie Underwood attacked on twitter: Getting Hate Tweets For "Sound of Music" Role

The film "The Sound of Music" became an instant classic in 1965. To date, it has grossed $286M on a budget of $8.2M. It airs every year usually preempting other TV programming and continually takes in high ratings.

Many people consider the role Julie Andrews performed as being the finest of her career and one which cannot be emulated much like Judy Garland in "The Wizard of Oz". So it should surprise no one that when a remake was announced starring country singer Carrie Underwood, people naturally had concerns about her ability to do justice to such a popular character. Carrie Underwood attacked The pressure is on: Carrie and Stephen rehearsing for the big night[/caption] However, Julie Andrews’s fans have scowled at Underwood's sneak peak performance from the film's trailer and they have let Underwood know of their displeasure.

In fact, Underwood said she is tired of receiving tweets from the original film's fans reminding her that she is not comparable to the venerable singer-actress.

Von Trapps Not Happy With Remake

The Von Trapps found out last spring that “The Sound of Music,” the movie based on their real-life family that fled Austria to escape the Nazis during World War II, was being revived after almost 50 years into a live television event.

It turns out that the real life Von Trapp family was less than pleased with The Sound of Music Live!—mainly because it starred Underwood.

Myles von Trapp Derbyshire, the great-grandson of Maria von Trapp, expressed his disapproval after learning about the casting decision almost a year ago.

"It's just upsetting that this could potentially be the final broadcast of our story," he told ABC News.

"And although her voice is amazing, she doesn't have acting experience…It's just the overall image, she's a country star, she won American Idol, she's very public in kind of a tabloid way."

Derbyshire, who currently resides in New York City, explained that the latest rendition does not honor his family's legacy.
"Now we have this glossy, tabloid figure playing this role," he added.

Thankfully, Underwood has a received a key endorsement from none other than Julie Andrews herself. The 78-year-old English actress expressed relief that someone else has finally taken on the role after so many years.

Andrews said that doing the role was the highpoint of her life and commended Underwood for accepting the role.

"Fifty years later, it's time somebody had another crack at it," the 78-year-old told Zap2it. "I had the best time of my life doing it, and it did wonderful things for me. I think it's great that it's being done again, but doing it live must be so daunting Carrie."

The live three-hour special, which is based on the original 1959 Rodgers & Hammerstein musical, airs Dec. 5 at 8/7c on NBC. A new face: Carrie Underwood - seen here in a promotional photo for her live NBC version of The Sound Of Music - told Entertainment Weekly she's received 'hate tweets' for taking on the iconic role of Maria[/caption] The Von Trapps 2.0: The cast of NBC's new musical[/caption]

'I get hate tweets saying I'm not Julie Andrews': Carrie Underwood defends taking on iconic role in The Sound Of Music
http://www.dailymail.co.uk/tvshowbiz/article-2513926/Carrie-Underwood-defends-taking-icon-role-The-Sound-Of-Music.html