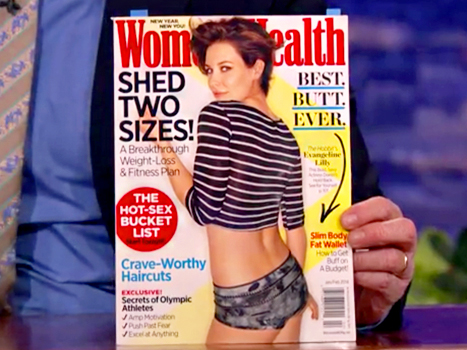 Evangeline Lily, the 34-year-old actress that thrilled millions several years ago on the popular TV show "Lost", is once again in the public spotlight for her starring role in the latest Hobbit film to be released a week from today. While making an appearance on the late night TV show "Conan O'Brian" to promote her film, O'Brian asks her if she was aware that her cover shot for the magazine "Woman's Health" would feature the caption "Best Butt Ever" with an arrow pointing down to her posterior.

Lily, whose photogenic face was aptly nicknamed "Freckles" on the show "Lost", retorted that she was unaware that any such caption would be used and would not have done the photo shoot if she were told that beforehand.

"They go, 'Best. Butt. Ever.' And they have an arrow going to your butt," Conan said to Lilly during the show before asking more about the magazine cover. "I'm just curious- is that something they tell you before you do the shoot?"

After enthusiastically replying "No," Lilly said that her goals for covering the magazine were a far cry from the actual result.

"Do you think I would have done the shoot if they said, 'Oh, by the way, we're gonna say 'Best Butt Ever! And put a big arrow to your behind,'" the actress revealed. "You know, every woman is after a kind of classy image. I didn't want T&A on my cover. It's a women's magazine, not Maxim."

"The Hobbit: The Desolation of Smaug" star seemed unfazed by the cover though, and also discussed her role as an Elf in the "Hobbit" film trilogy.

Lily is the mother of a two-year-old and expressed no desire to be known for T&A (an acronym referring to two of a female's three private areas).

Rather, Lily said her desire is like that of most women which is to put forth a classy image. She said had she wanted to do T&A images, she would have done a photo shoot with Maxim. Lily is a Canadian actress from Alberta and was recently married in 2010.

The Hobbit: The Desolation of Smaug -- in which Lilly plays an elf named Tauriel -- hits theaters Dec. 13.