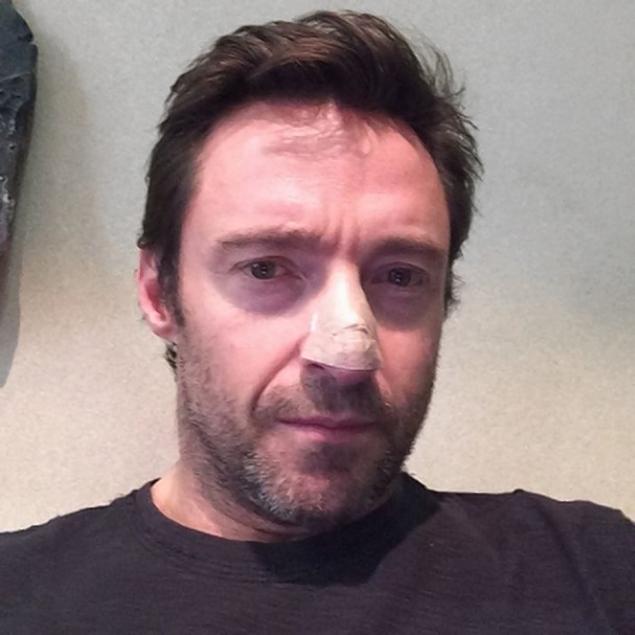 THEHUGHJACKMAN VIA INSTAGRAM
'Deb said to get the mark on my nose checked. Boy, was she right! I had a basil cell carcinoma. Please don't be foolish like me. Get yourself checked. And USE sunscreen!!!' Hugh Jackman reveals he has skin cancer in an Instagram post Thursday.
[/caption]Jackman Hits Red Carpet After Cancer Scare

Hugh Jackman was unafraid to step out onto the red carpet on Tuesday despite the recent skin cancer scare that he revealed to fans through an interview in November. The 45-year old star of “The Wolverine” attended a charity event with his wife Deborra-Lee Furness and it was his first public appearance after his diagnosis. The only outward appearance of his illness was a well placed bandage on his nose. Last month Jackman communicated with his followers on social media. He sent out a picture of himself with a heavily bandaged nose and implored everyone to get checked for cancer and also use sunscreen.

Hugh Jackman didn’t step out far; he resides in New York and has been a hit in several Broadway productions. The event he attended was hosted by filmmaker David Lynch. After the appearance Jackman spoke to reporters and said that he is feeling relieved after having the cancer removed and was happy to get back out on the town. He credited Furness for imploring him to head to the doctor’s to get checked for the disease.

The talented Australian will return to movie screens next summer when he reprises his role as Logan AKA Wolverine in the new super her o film “X-Men: Days of Future Past.”