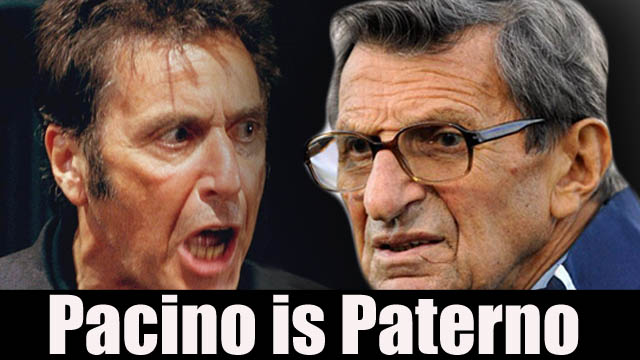 Joe Paterno was an icon at Penn State during his 45 years as the head coach of the Nittany Lions. Sadly, as Paterno was planning a graceful retirement, the scandal broke out involving Jerry Sandusky. Paterno was fired for his role in the scandal which largely dealt with turning a blind eye to mounting evidence of Sandusky's improper behavior.

Brian de Palma will direct the film. It marks the first time Pacino and de Palma will collaborate since the 1993 film "Carlito's Way". That film was a moderate box office success, but has gained status as a cult classic in the years that followed.

The film will be called "Happy Valley" and will include the Sandusky scandal. The film's producer is Edward Pressma, who made the classic "Wall Street", said that film will focus on Paterno's righteous character and his tragic flaw that brought about the demise of his career. It is not clear at this time who will play the ignominious role of Jerry Sandusky.