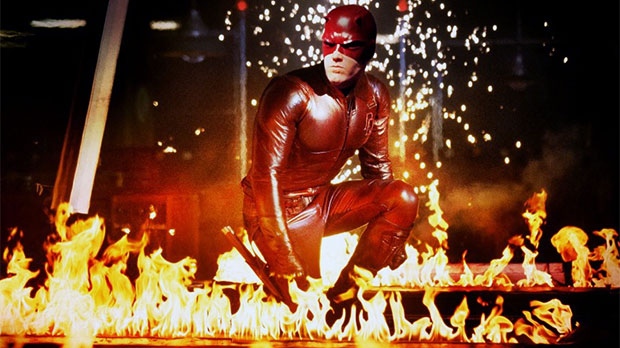 
So it seems that the die hard comic book film fans weren't the only ones who seemed to have a bad initial reaction to the casting of Ben Affleck as the new Batman in the upcoming summer blockbuster Batman vs Superman. It seems that Affleck himself had initial hesitancy about accepting the role when it was offered to him. Affleck claims it was only the urging of director Zach Snyder that he agreed to replace Christian Bale and become film's sixth actor to portray the caped crusader. The actor turned Oscar winning director will follow Bale, George Clooney, Val Kilmer, Michael Keaton and role originator Adam West as Batman.

Unlike his predecessors Ben Affleck actually has experience playing a super hero. He headlined the film version of Daredevil in 2003. That film had a mixed reaction from critics as well as comic fan boys.

Batman vs Superman is a different direction for a normal sequel. After the strong and positive reception afforded "The Avengers" two summers ago, the ensemble super hero cast has proven to be successful. Not all of the characters to be featured in the new film has been announced and in addition to Superman and Batman you will also see Wonder Women for the first time in a movie and Snyder has promised additional surprises. Ben Affleck in a scene from 'Daredevil'
[/caption]

Related Topics:Ben Affleck
Up Next

models forced to wear masks thanks so chinese smog