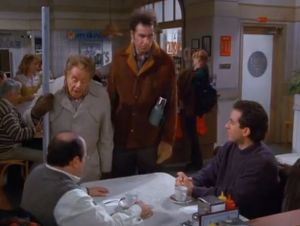 It's the Festivus for the rest of us, much to the chagrin of some members of the Christian community.

When Seinfeld scriptwriter Dan O'Keefe conceived the popular non-holiday a decade and a half ago, even he had doubted its ability to catch on. That's why O'Keefe himself expressed elation at the fact that his humorous take on holiday extravagance has sparked controversy nationwide.

“Am I to understand that some humanoid expressed outrage that the baby Jesus was behind a pole made of beer cans?” Dan O’Keefe asked Mother Jones, which reached out to him for comment about the latest salvo in the network’s perceived “War on Christmas.”

The outrage began when an atheist erected a 6-foot Festivus pole made of Pabst beer cans to protest a privately funded nativity scene on public grounds at the capitol.

“I am so outraged by this,” Carlson said during a three-on-one Fox News debate Tuesday in which she, a rabbi and a Catholic laid into an atheist arguing for the separation of church and state.

“Why do I have to drive around with my kids to look for nativity scenes and be like, ‘Oh, yeah, kids, look. There’s Baby Jesus behind the Festivus pole made out of beer cans!” she said.

Earlier this week, a series of Christian groups hailing from Florida and Wisconsin respectively have petitioned their local governments, on the grounds of having taken offense to the erection of a Festivus pole in their neighborhoods, one of which, made of beer cans, stands tall in the Florida Capital beside a nativity scene.

The pole itself, traditionally gray and unpretentious, is intended to be a step down from the extravagance of a Christmas tree. Many Christians, however, feel that the pole is an insult to their belief system. When asked to comment on the controversy, Festivus creation Dan O'Keefe had this to say: "For better or worse, this is the most recognizable thing I've ever done on TV...which is to say my career peaked at age 26, maybe... But I am honored to have this wart on a very lovely pair of buttocks in the pop-culture spectrum."