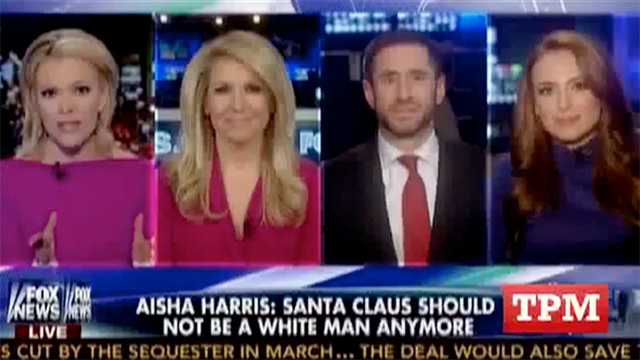 Fox news commentator Megyn Kelly has responded to the backlash of criticism she has received over her recent on-air comments about both Santa Claus and Jesus Christ being white by insisting it was an attempt at humor that obviously fell flat.

Aisha Harris, a blogger with Slate, wrote that Santa Claus should no longer be a white man, based on a mid 19th century to early 20th century norms in America.

"And by the way, to all you kids watching at home, Santa just is white. But this person is arguing that maybe we should also have a black Santa. But Santa is what he is...Jesus was a white man, too. It's like we have, he's a historical figure. That's a verifiable fact, as is Santa. I just want kids to know that."

She said that the criticism revealed just how many individuals are humorless in the country in addition to revealing that many people are very quick to find fault and draw on the race card, assuming that Fox News Channel news commentators are prejudiced.

Among the worst critics of Kelly's white Santa comments was op-ed writer Aisha Harris, who is black. Harris lambasted Kelly for perpetuating the Santa is white myth that has been a continuous part of American culture. She made the suggestion that Santa Claus no longer be portrayed as a white man but rather substituted with a penguin as a symbol of Santa Claus the way a rabbit is used to portray the Easter Bunny.

"Let's ditch Santa the old white man altogether, and embrace Penguin Claus—who will join the Easter Bunny in the pantheon of friendly, secular visitors from the animal kingdom who come to us as the representatives of ostensibly religious holidays," suggested Harris. "It's time to hand over the reins to those deer and let the universally beloved waddling bird warm the hearts of children everywhere, regardless of the color of their skin."

Kelly says she think it is ridiculous that critics are claiming it is a racist notion to have a white Santa Claus. Kelly says her comments merely acknowledged that Santa Claus is and has always been portrayed as having white skin.

"Contrary to what my critics have posited, neither my statement, nor Harris', I'm sure, was motivated by any racial fear or loathing," said Kelly. "In fact, it was something far less sinister: A lifetime of exposure to the very same commercials, mall casting calls, and movies Harris references in her piece."

"We continually see St. Nick as a white man in modern-day America," she added. "Should that change? Well, that debate got lost because so many couldn't get past the fact that I acknowledged, as Harris did, that the most commonly depicted image of Santa, does, in fact, have white skin."

Warning: preg_replace(): The /e modifier is no longer supported, use preg_replace_callback instead in /home/customer/www/ecanadanow.com/public_html/wp-content/plugins/seo-smart-links/seo-links.php on line 98
Continue Reading