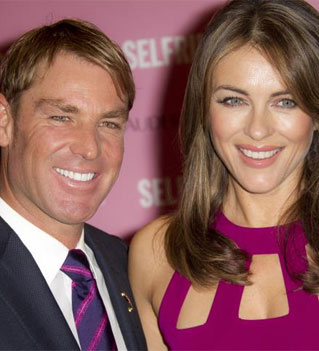 Anyone following the romantic exploits of actress Elizabeth Hurley and Australian cricketer Shane Warne may need to develop a score card. It seems that Hurley and Shane are on the outs again, having split up a second time now after originally calling off their engagement in September, only to reconsider to keep fanning the flames of romance again. After their first reunion following the cancellation of all wedding plans, Warne commented that they simply needed some time to fix assorted issues in their relationship, insisting that neither individual was ready to say goodbye.

But now things have taken a sad turn as their plans to spend the Christmas holidays together at Hurley's estate in the country also seemed to be tossed onto the trash heap. The pair first caught sight of each other three years ago and have been dating ever since. A source close to the couple reports that Hurley felt that despite Herculean efforts to sort through the problems getting in the way of their happiness, she felt there were insurmountable obstacles that led both to conclude they are better off apart than together.

"It is very sad and they tried to make it work but there were just too many issues in the way. Elizabeth is taking it one day at a time. She will always be extremely fond of Shane," HELLO! magazine quoted a source as saying.

Neither Hurley nor Warne have made any public comments about their most recent split.