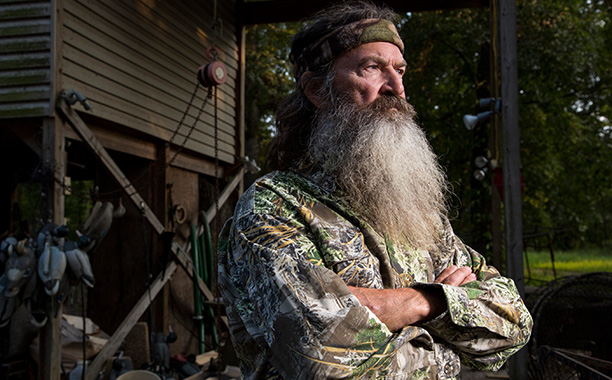 Phil Robertson, featured on A&E's Duck Dynasty, is causing a stir with his anti-gay comments in GQ magazine's January issue. Duck Dynasty is an American reality TV series based on the Robertson family, who became wealthy from their family-operated business which makes products for duck hunters.

The Robertson's are widely known for being a religious family. Phil Robertson, in his interview with GQ, compared "homosexual behavior" to "bestiality", all the while paraphrasing Corinthians from the bible. The family describes Phil as the outspoken one, but fully agrees with and supports Phil's statements to GQ. Phil explicitly says:

"...they won't inherit the kingdom of God. Don't deceive yourself. It's not right"

The Gay and Lesbian Alliance Against Defamation, GLAAD, were quick to respond to Phil's anti-gay comments. GLAAD claims that these comments are not what true Christians believe. The alliance also asserted that Phil knows nothing about the support of Americans for the legal recognition of gay and lesbian people. GLAAD wants A&E to reexamine their ties with the Robertson family.

"GQ Magazine's profile of Phil Robertson included some of the vilest and most extreme statements uttered against LGBT people in a mainstream publication. His quote was littered with outdated stereotypes and blatant misinformation." GLAAD spokesperson Wilson Cruz added, "Phil and his family claim to be Christian, but Phil's lies about an entire community fly in the face of what true Christians believe. He clearly knows nothing about gay people or the majority of Louisianans — and Americans — who support legal recognition for loving and committed gay and lesbian couples. Phil's decision to push vile and extreme stereotypes is a stain on A&E and his sponsors who now need to reexamine their ties to someone with such public disdain for LGBT people and families."

A&E released a statement from Phil Robertson which addressed this controversy. In his statement, Phil maintains his beliefs towards the gay and lesbian community, claiming that his mission in life is to teach people about what the Bible says and why he follows Jesus Christ. He said he will never disrespect anyone just because they are different from himself.

"I myself am a product of the 60s; I centered my life around sex, drugs and rock and roll until I hit rock bottom and accepted Jesus as my Savior," the statement reads. "My mission today is to go forth and tell people about why I follow Christ and also what the bible teaches, and part of that teaching is that women and men are meant to be together. However, I would never treat anyone with disrespect just because they are different from me. We are all created by the Almighty and like Him, I love all of humanity. We would all be better off if we loved God and loved each other."

A&E had nothing else to add.