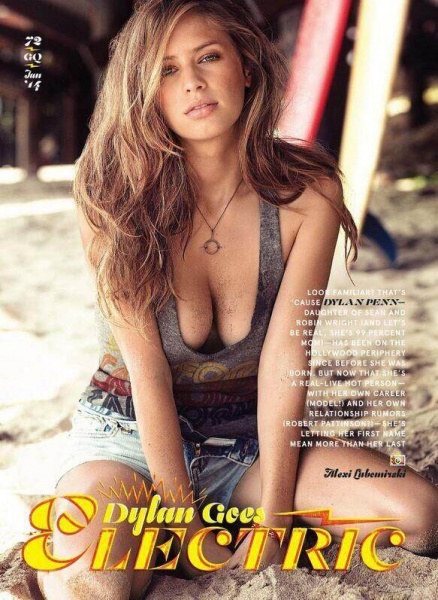 Dylan Penn, the lovely 22-year-old daughter of actors Sean Penn and Robin Wright, has landed a spot in a Gap Fashion Campaign. The photographs will be taken by George Kotsiopoulos who co-stars on the "E!" network's reality show "Fashion Police".

The photo spread will be available starting next month and will coincide with Kotsiopoulos' new book entitled "Glamorous". Photographs will be visible online, in retail stores and magazines. The pictures will be taken later this week in Los Angeles.

Dylan was the topic of rumors earlier this year when she was twice spotted with Twilight star Robert Pattinson. The first sighting was in Hollywood back in September. Last month the two were again seen at a book signing party in New York City. Penn has denied any romance between her and Pattison telling GQ Magazine that the rumors amounted to nothing more than bovine excrement.

When asked in the new issue of GQ about the attention she's received because of Pattinson, Penn says, "That's been very foreign to me. But actually kind of funny, because it's all bulls--t."

Both her parents remain A-list actors in Hollywood. Most recently, her mother won critical acclaim for her role in the Netflix Series "House of Cards" opposite actor Kevin Spacey. Her father recently starred in the Neo-Noir film "Gangster Squad" where he portrayed the infamous gangster Mickey Cohen. He will also appear in the upcoming film "The Secret Life of Walter Mitty" out in theaters this week.