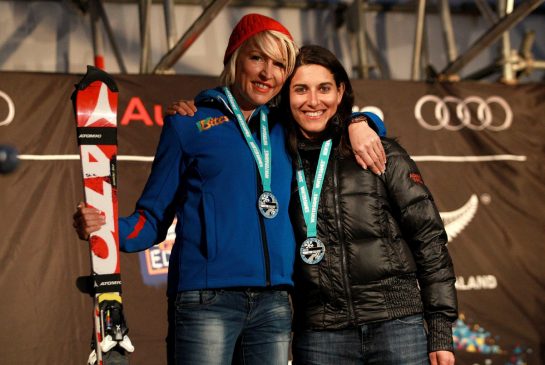 Mills, age 45, was part of the UK ski team and arrived for the competition wearing a non-regulation boot. When Paralympic Committee member Sylvana Mestre pointed that fact out to her, Mills responded by calling her a pejorative that rhymes with the word "rich".

Words weren't the only thing on Mills' mind. She was dead set on getting a piece of Mestre and had to be restrained by staff. While being held back, she made threats to Mestre that she would have her fired from her position. However, it is Mills who has been fired so to speak. She abruptly quit the team rather than face additional scrutiny over the incident.

However, quitting the team won't end matters for Mills. The IPC which oversees the games is considering taking up sanctions against her. Understandably, the organization does not want to condone any such verbal or physical abuse by anyone associated with the prestigious games. Ironically, Mills' participation in the games was supposed to rehabilitate her public image in England where she is viewed negatively over her acrimonious divorce to ex-Beatle Paul McCartney.
[caption id="attachment_76101" align="aligncenter" width="545"] MATT BLYTH / GETTY IMAGES FILE PHOTO
Heather Mills of Britain and Melanie Schwartzc of the U.S. pose on the podium after their Womens Slalom Standing race during the IPC Alpine Adaptive Slalom World Cup on day eight of the Winter Games NZ on August 22, 2013 in Queenstown, New Zealand. Millls, the former wife of Beatles star Paul McCartney, was accused Thursday of lunging at a Paralympic official in a fit of rage and screaming insults after being forced to abandon her attempt to qualify for the British skiing team for next year’s games.[/caption]

'You bitch, you bitch': What Heather Mills allegedly shouted at Paralympics official as she quit UK disabled skiing team after 'wrong type of boot' stops her competing
http://www.dailymail.co.uk/news/article-2526273/Heather-Mills-flies-rage-Paralympics-official-quits-UK-disabled-skiing-team-wrong-type-boot-stops-dream-competing.html