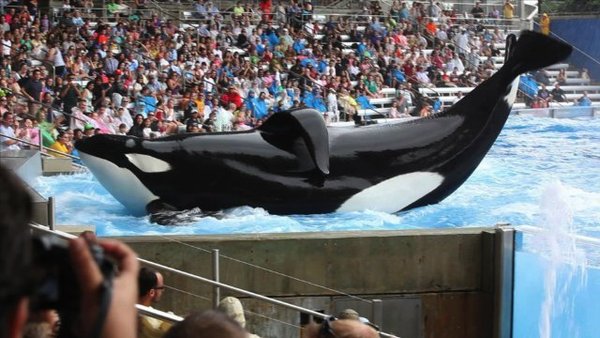 A killer whale is shown in a scene from "Blackfish," a documentary that caused a backlash against SeaWorld. (Magnolia Pictures)[/caption]

After no less than 8 different musical acts cancelled appearances at Sea World following a documentary that claims the theme park chain abuses its animals, Sea World has placed full page advertisements in major newspapers across the country, including the New York Times.

The ad is designed as an open letter to readers and Sea World visitors, outlining the company's continuing efforts to care for its marine mammals as well as dispute various claims made in the damaging documentary. The ad states that Sea World is anxious to set the record straight regarding a variety of what it calls inaccuracies pointed out regarding its treatment of its whales and other sea life that perform at its parks.

Willie Nelson, Barenaked Ladies and Trisha Yearwood are among the musical acts who have chosen to cancel live performances at Sea World locations due to what they learned about Sea World's treatment of its animals in the "Blackfish" documentary.

The film was inspired by the death a few years ago of a veteran trainer named Dawn Brancheau when Sea World officials initially blamed her actions as being the cause of Tilikum's dragging her to the bottom of the pool during a performance.

Here is the entire open letter from Seaworld:

SeaWorld: The Truth Is in Our Parks and People

Inaccurate reports recently have generated questions about SeaWorld and the animals in our care. The truth is in our parks and people, and it’s time to set the record straight.

The men and women of SeaWorld are true animal advocates. We are the 1,500 scientists, researchers, veterinarians, trainers, marine biologists, aquarists, aviculturists, educators and conservationists who have dedicated our lives to the animals in our care as well as those in the wild that are injured, ill or orphaned. Whether it’s a sea lion, manatee, sea turtle or whale, we are on call 24/7.

Here are some important facts about SeaWorld and our work:

At SeaWorld, this has been our calling since we first opened our doors 50 years ago. It is a responsibility we do not take lightly. More than 400 million guests have visited SeaWorld. We are proud that their experiences here have a lasting and positive impact on them, and on the world in which we live.

The truth about SeaWorld is right here in our parks and people. Our guests may enter our gates having never given much thought to the remarkable animals in our oceans. When they leave with a greater appreciation for the importance of the sea, educated about the animals that live there and inspired to make a difference, we have done our job.

Paul Rudd Goes From The Newsroom To The Ant Hill: Paul Rudd Cast As Ant Man