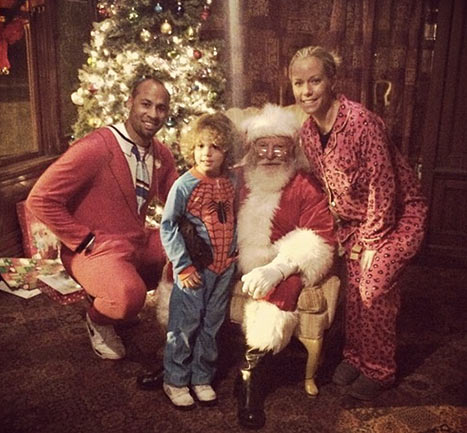 Playboy playmate turned reality star, Kendra Wilkinson is buzzing all over the internet after her most recent Instagram picture was posted. No, nothing inappropriate and actually something quite heartwarming. The former playmate posted a picture of herself, pregnant with her next child, and her husband and son alongside of a Santa impersonator to make a warm holiday card.

Her husband, Hank Baskett, is a former NFL football player and gained a little bit of reality star fame when he starred in a reality show about his marriage to the former playmate.

The couple announced in October, through US WEEKLY, that they were expecting another child and that they are "very excited". The couple released details saying that the baby will be a little girl and that they welcome the addition to the family. Kendra Wilkinson states, "I mean, it's because of him we're having another one. It's perfect timing for everyone."

The former Playboy playmate has done well for herself without her reality shows to keep her in the eye of the public. Now taking to social media outlets Kendra has been able to keep her fanbase happy while providing a good and happy life for her burgeoning family.