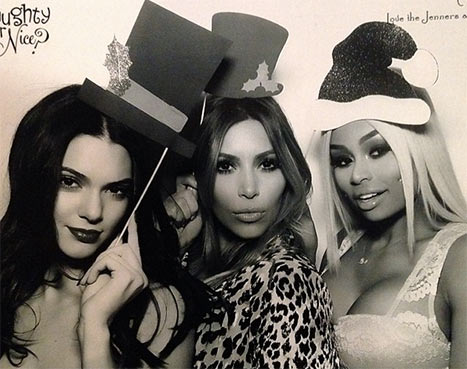 Recently, Kris Jenner threw her annual Christmas Eve party for friends and family members. Most of the Kardashian-Jenner clan attended the event, as did other notable individuals. Kim Kardashian, always the star of the party, took photos in a photo booth with various friends and family members. Without a doubt, the photos showed how big the evening was for those in attendance.

Kardashian took photos with some familiar faces throughout the event. This included her sisters Kylie and Kendall Jenner. The younger sisters posted their own photos from the evening on Instagram, too. Likewise, Kim appeared in photos with her fiancée, rapper Kanye West. Each picture appeared on Kardashian's Instagram account in black and white with various lighthearted captions. It seems as though each guest enjoyed themselves at the party.

The newest season of the Kardashians' reality series is set to premier soon. Plus, Kardashian and West are about to get married. Each member of the Kardashian-Jenner clan seems to have something important going on. The youngest sisters of the family are both models, too. In the end, this particular family is quite active and isn't afraid to flaunt their lives in front of American television and Internet audiences.