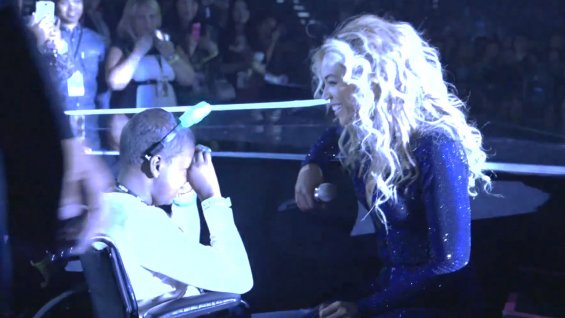 Taylon Davis, 12, was diagnosed with an inoperable brain tumor, and her last wish was to dance with Beyoncé. Once the superstar learned of Davis' wish, she immediately contacted the Make-A-Wish Foundation, which is an organization that assists with granting a child's wish that was diagnosed with a life-threatening medical condition. Within a blink of an eye, the granting of Davis' wish was already in motion. On December 6, Beyoncé "Mrs. Carter" tour began in Las Angeles where Davis was expected to attend. Excited and anxious to see Beyoncé perform, she had no clue she would actually meet her face to face.

Midmost of the concert, Davis was placed on the front stage. Moments later, Beyoncé meets with her on stage after being brought down on an aerial hoist. Davis sees her and began to squirm around in her wheel chair in excitement - realizing that she finally got her wish. The two sung one of Beyoncé’s songs "Love On top" and later danced to "Survivor". Afterwards, Beyoncé planted a kiss on her cheek and the 12-year-old begun to cry tears of joy. Videos of the touching duet are posted on YouTube and it has received 275,000 views thus far.