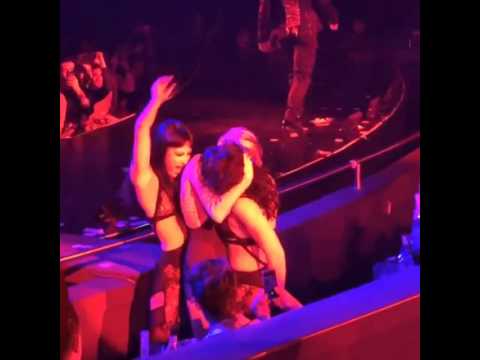 Las Vegas, NV - Britney Spears, age 32, has sold over 100 million records during her career and nearly 29 million digital downloads. Her singing tours have been very successful. Back in 2012, Spears was the highest earning singer raking in just over $38 million. This weekend, she kicked off her Las Vegas run in grand style replete with dancers and stage lighting. Spears will perform 210 shows during the course of the next three years and stands to make as much as $100 million from the agreement.

All of this is mentioned to underscore the fact that Spears doesn't need anyone to promote her concerts. However, Miley Cyrus, who truly believes herself to be all that, couldn't help but draw attention to herself at Spears' first concert. The brash 21-year-old sang loudly to Spears' songs and then took to bumping and grinding along with two of the stage dancers. She even started kissing one of them. Cyrus believes that when it comes to sexuality, she can bring it like no other.

Singers Katy Perry and Selena Gomez were both in attendance and danced to the music, but most people probably wouldn't know that if it weren't for Cyrus' attention grabbing antics.

On The Web:
MILEY CYRUS 'MAKES OUT' WITH DANCER IN THE FRONT ROW OF BRITNEY SPEARS' FIRST LAS VEGAS CONCERT - WATCH
http://www.sugarscape.com/main-topics/music/1005320/miley-cyrus-makes-out-dancer-front-row-britney-spears-first-las-vegas-conc

Zoe Saldana On Cosmetic Surgery: “I Wouldn’t Mind Buying A Pair Of Breasts”